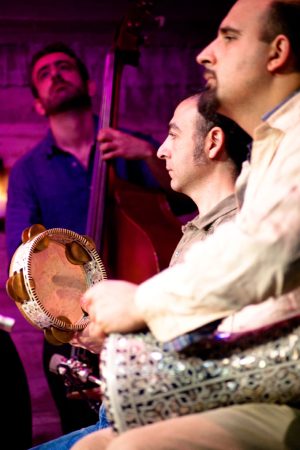 The Williams College Department of Music presents Zikrayat. This event is free and open to the public.

Zikrayat is an Arab music and dance ensemble dedicated to presenting together the classical music and the dance traditions of Egypt, Lebanon, and the greater Arab World, in vibrant stage productions evoking the theatrical atmosphere and dramatic depth of classic Egyptian musical cinema. Alternating vocal and instrumental numbers with solo and group dance numbers, Zikrayat’s mission is to highlight the diversity of Arab culture for mainstream Western audiences in an authentic, yet entertaining contemporary representation.

Inspired by the “golden age” of Egyptian musical cinema (the 1940’s-60’s), a period during which most of the major figures in music and dance in the Arab world worked in film, Zikrayat (meaning “memories” in Arabic) researches films from this period, searching for forgotten gems not performed since this era. Zikrayat’s repertory also includes traditional and standard numbers, as well as original compositions in the style of this period, classical as well as folkloric music.

The Golden Age of Egyptian Cinema

For most of the 20th century, Cairo, Egypt was the center of the film, television, and recording industries of the Arab world, much like Bombay/Mumbai (sometimes called “Bollywood”) is for India. And for most of that time, the Musical was the most popular genre of film produced in Cairo. Consequently, the film industry employed most of the best musicians, singers, and dancers in Egypt; almost all of the most famous names in music and dance from Egypt in the mid-20th century, the singers Abdel-Wahhab, Umm Kulthum, Farid el-Atrash, Esmahan, Layla Murad, Fayza Ahmed, and Abdel-Halim Hafiz, and the dancers Naima Akif, Taheya Karioca, Samia Gamal, Nagwa Fuad, and Fifi Abdou, as well as many others, were all huge stars in Egyptian Cinema.

The standards for art and performance were very high in these films, especially in what is often referred to as the “Golden Age” of film in Egypt, the 1940’s, 50’s and 60’s. With their mix of the classical, the folkloric, the dance, the serious as well as the light-hearted, many of the best films (such as the famous Tamr Hinna, starring the singer Fayza Ahmed and the dancer Naima Akif) managed to capture and present the whole range of Arabic music and dance. Toward the latter part of this era, a nascent film industry in Lebanon, and the rising popularity of musical theater there (much of it centered around the singer Fairuz and the composer-lyricist team of the Rahbani brothers), contributed as well. This period resulted in the production of an enormous repertory of songs and dance pieces, a small percentage of which is very well known and enormously popular throughout the Arab world (dance pieces like “Aziza;” songs like “Ghannili Shwayya”), but most of which is almost totally unknown or forgotten.

This event is part of the Ernest Brown Music Series.