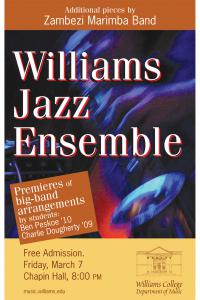 The Williams Jazz Ensemble will perform on Friday, March 7, at 8 p.m. in Chapin Hall on the Williams College campus. They will be joined by the Zambezi Marimba Band for selections during the evening. This free event is open to the public.

This evening of music will feature student arrangements by Charlie Dougherty ‘09 and Ben Peskoe ‘10. as well as a collaboration between the Zambezi Marimba band and the Jazz Ensemble in a performance of an arrangement of Thelonious Monk’s Epistrophy.

Dougherty’s arrangement of “Blue Train” by John Coltrane is an homage to the original recording. He based the melody on the original three-horn voicings, and the soli section is based on tenor sax, trumpet, trombone, and bass solos from the original recording that he transcribed and adapted. The ending also pays tribute to Coltrane’s original recording, as the melody modulates from Eb up to G and then back down to Eb. This third relation is an important tonal aspect of the entire Blue Train album. Dougherty is a history and music double major from Montvale, N.J.

Thelonious Monk’s Evidence is marked by syncopated chordal hits that function as the melody, rather than a more traditional single-note line. Peskoe’s arrangement uses these chords, voiced in the trombone section, as a base for the chart. The trumpets and saxophones then provide a counterpoint to the trombones, creating a layering effect in the beginning and end of the piece. Ben is a math and philosophy major from Briarcliff, NY.

Under the direction of Andy Jaffe, the flagship Williams Jazz Ensemble (big band) plays formal concerts on campus, and also travels each year, with performances ranging from the Boston area to New York as well as throughout the Western Mass. region. They recently returned from a very exciting and successful tour in Mexico. Other performances this year have included at the Pittsfield City Jazz Fesetival with drummer Winard Harper and at The Rivers School Jazz Festival held at the Rivers School Conservatory outside of Boston

Photos of the rehearsal for the March 7, 2008 Concert.