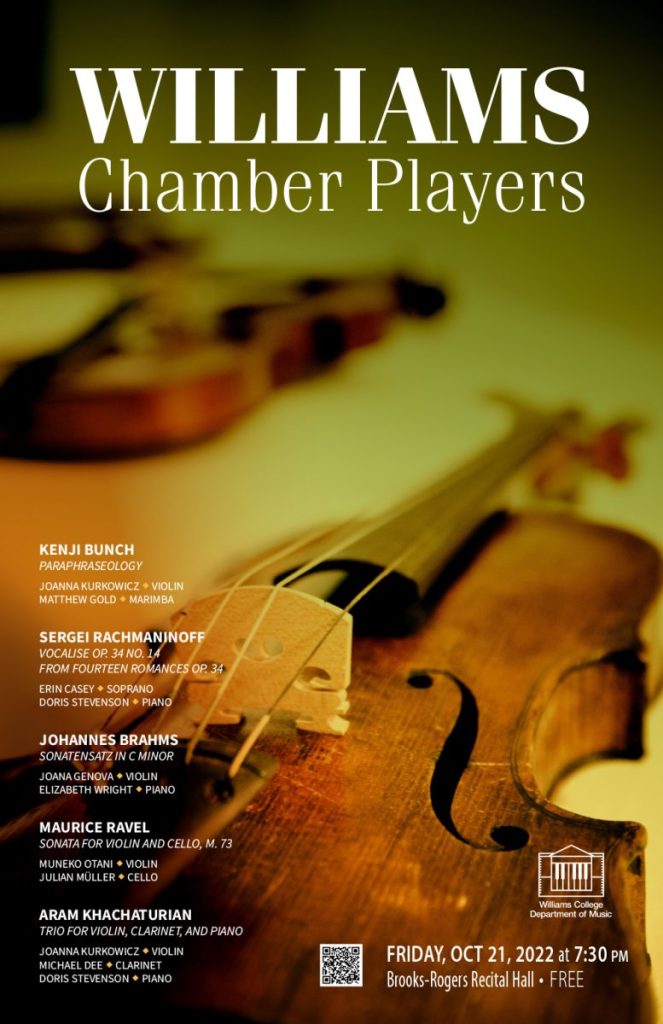 Williams Chamber Players present a program of works written mostly in the early in the 20th century by composers who clung to harmonies of the Romantic era.

Starting the program, Joanna Kurkowicz, violin, and Matthew Gold, marimba, perform Paraphraseology, written in 1999 by Kenji Bunch (b.1973). Kenji Bunch explores how in both music and language, ancient fragments of the past persist in an unconscious manner through much of our regular speech and expression.

Aram Khachaturian wrote Trio for Violin, Clarinet and Piano as a student in Moscow at age 29.  Inspired by the vivid tunes of Armenian, Azerbaijani, and Georgian songs and dances performed by folk bards and musicians, Khachaturian’s musical communion is performed by Joanna Kurkowicz, violin, Michael Dee, clarinet, Doris Stevenson, piano.

The Williams Chamber Players is a faculty chamber ensemble that presents concerts for the college and community throughout the academic year. Repertoire for concerts is drawn from the standard chamber music with special attention to music of the 20th and 21st centuries, and to music by Williams composers. Musicians are normally drawn from the ranks of artists in residence, artist associates, and other faculty members and visiting artists at Williams.

The Williams Chamber Players was founded in 1999 and is coordinated by Doris Stevenson.