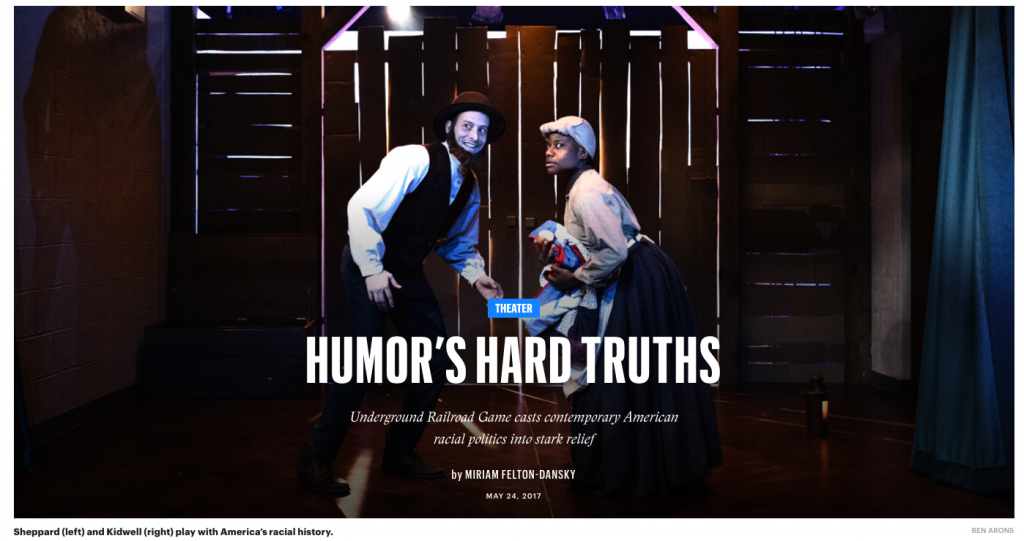 Underground Railroad Game contains sexually explicit material, strong language, and mature themes. Because of the challenging nature of the material we suggest audience ages 18 and up. Questions about what you’re in for? You can reach out to Producing Director, Randal Fippinger for more info.

Named one of the top ten theatre experiences of 2016 by the New York Times, Underground Railroad Game is a vivid, piercing piece of experimental performance from Philadelphia-based company Lightning Rod Special. Over its rapid-fire 75 minutes, the piece toes the line between sketch comedy show and excruciating American history lesson, set in a middle school classroom.

At Hanover Middle School, two teachers get shockingly down and dirty with a lesson about race, sex, and power. The quick-witted duo goes round after round on the mat of our nation’s history in an R-rated, far-reaching, and absolutely unflinching comedy.

Lightning Rod Special’s raucous performance earned them the 2017 Obie Award for Best New American Theatre Work, one of the highest honors in the field. By tearing down barriers of political correctness and challenging the contemporary liberal interracial dialogue, Underground Railroad excavates hidden—and often ugly—truths about race, identity, and historical memory.

“If we interrogate the mythos of the Underground Railroad we uncover an apparent need to make systemic exploitation, degradation and objectification palatable. Why is it that we love to narrativize ourselves in ways that propagate the very violence we proclaim to upend?” – Jennifer Kidwell & Scott Sheppard

This performance is made possible by the W. Ford Schumann ’50 Endowment for the Arts and the Lipp Family Fund for Performing Artists.