Two Voices from the Avant Garde 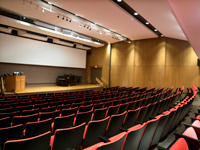 * world premiere
~~~~~~~~~~~~~~~~~~~~~~~~~~~~~~~~~~~~
Having known each other’s work for many years, Ms. La Barbara and Mr. Chiu joined forces in 2001 in the much celebrated festival at Carnegie Hall, “When Morty met John”. Featuring the FLUX Quartet in various chamber combinations, Margaret Leng Tan on piano, and La Barbara on voice and as Series Artistic Director, “When Morty met John” presented, in a collection of 11 concerts spanning 3 seasons, a thorough overview of the group of composers that has come to be known as The New York School, personified by the unique friendship between John Cage and Morton Feldman, and their close association with Earle Brown and Christian Wolff.
—
JOAN LA BARBARA’s career as a composer/performer/soundartist explores the human voice as a multi-faceted instrument expanding traditional boundaries, creating works for multiple voices, chamber ensembles, music theater, orchestra and interactive technology, developing a unique vocabulary of experimental and extended vocal techniques: multiphonics, circular singing, ululation and glottal clicks that have become her “signature sounds”, garnering awards in the U.S. and Europe including the 2004 Guggenheim Fellowship in Music Composition, the prestigious DAAD Artist-in-Residency in Berlin and 7 National Endowment for the Arts fellowships: Music Composition, Opera/Music Theatre, Inter-Arts, Recording (2), Solo Recitalist and Visual Arts; ISCM International Jury Award; Akustische International Competition Award; Meet The Composer and ASCAP Awards and numerous commissions for concert, theatre and radioworks. Commissions include tapeworks “in the dreamtime” and “Klangbild Köln” for WestDeutscher Rundfunk; “Dragons on the Wall”, a music score commissioned by Mary Flagler Cary Trust and “Calligraphy II/Shadows” for voice and chinese instruments, both for Nai-Ni Chen Dance Company; the choral work “to hear the wind roar” for Gregg Smith Singers, I Cantori and the Center for Contemporary Arts in Santa Fe and “Events in the Elsewhere” from “The Misfortune of the Immortals”, both funded by Meet the Composer/Lila Wallace; “Awakenings” for chamber ensemble, commissioned by the University of Iowa Center for New Music, “L’albero dalle foglie azzurre” (tree of blue leaves) for solo oboe and tape, commissioned by the Saint Louis Symphony, and “A Trail of Indeterminate Light” for cellist who also sings. “73 Poems”, her collaborative work with text artist Kenneth Goldsmith, was included in “The American Century Part II: SoundWorks” at The Whitney Museum of American Art and recently performed as part of Poetry International 2004 at London’s Royal Festival Hall. “Messa di Voce”, an interactive media work, in collaboration with Jaap Blonk, Golan Levin and Zachary Lieberman, premiered at Ars Electronica in Linz, Austria on September 7, 2003 and was awarded Honorary Mention in the 2004 Prix Ars Electronica. The American Music Center’s Live Music for Dance program recently commissioned a new score from La Barbara, “Landscape over Zero” for Nai-Ni Chen Dance Company and Ne(x)tworks ensemble for the 2004-2005 season. La Barbara is currently at work on “WoolfSong”, a new opera inspired by the life and work of Virginia Woolf.

Her works have been choreographed by John Alleyne for Ballet British Columbia, Martha Curtis, Catherine Kerr, Martha Scott and used by Merce Cunningham for an “Events” evening. Filmscores include “Anima” (Elizabeth Harris Productions); a score for voice with electronics for Steve Finkin’s Signing Alphabet animation to assist hearing children in learning to communicate with the deaf, broadcast worldwide since 1977 for “Children’s Television Workshop/Sesame Street”; and music for films by Richard Blau, Monica Gazzo, Amy Kravitz, Elyse Rosenberg and Steven Subotnick and Harvey Wang and for video works by Susanna Carlisle. “Immersion”, an underwater dance film by Jodi Kaplan featuring La Barbara’s music was shown at the 1999 “New Directors/New Films” Festival at the Museum of Modern Art and at the Metropolitan Museum of Art in New York. La Barbara composed and performed the “Angel Voice” for actress Emmannuelle Béart in the feature film “Date with an Angel”, performed the “Newborn Vocals” for “Alien: Resurrection” and was vocal soloist on the John Frizzell musical soundscore for “I Still Know What You Did Last Summer”.

Educated at Syracuse and New York Universities and Tanglewood/Berkshire Music Center, studying voice with Helen Boatwright, Phyllis Curtin and Marian Szekely-Freschl, she learned her compositional tools as an apprentice with the numerous composers with whom she has worked for three decades. La Barbara served on the faculties of California Institute of the Arts, Hochschule der Künst in Berlin, The College of Santa Fe and the University of New Mexico, as well as maintaining a private studio. She served as Vice President of the American Music Center in New York; co-Artistic Director of the New Music America Festival in Los Angeles; was Contributing Editor for Musical America/High Fidelity and Schwann/Opus magazines and from 1989-2002 produced and co-hosted “Other Voices, Other Sounds,” a weekly radio program focussing on contemporary classical music for KUNM-FM.

As a composer-improvisor, he has performed his works in numerous countries around the world, including Mongolia and Uzbekistan. In 2002, he composed his first soundtrack for the short film Boris (written and directed by Francesca Galesi), which won the top prize at the NY Expo Festival of Short Films.

With the FLUX Quartet, of which he is founder and first violinist, Mr. Chiu has appeared at international festivals in Melbourne and Oslo, as well as American festivals such as Ojai, Summergarden, and Lincoln Center’s A Great Day in New York. In the fall of 2003, the FLUX Quartet performed the monumental String Quartet No.2 by Morton Feldman (recording available on mode.com) in the opening season of Carnegie’s Zankel Hall.

Holding degrees in music and chemistry from Yale, as well as a doctorate in music from Juilliard under the tutelage of Cho-Liang Lin, Mr. Chiu occasionally reminisces about his childhood appearance with Tom Hanks in the film The Man With One Red Shoe.