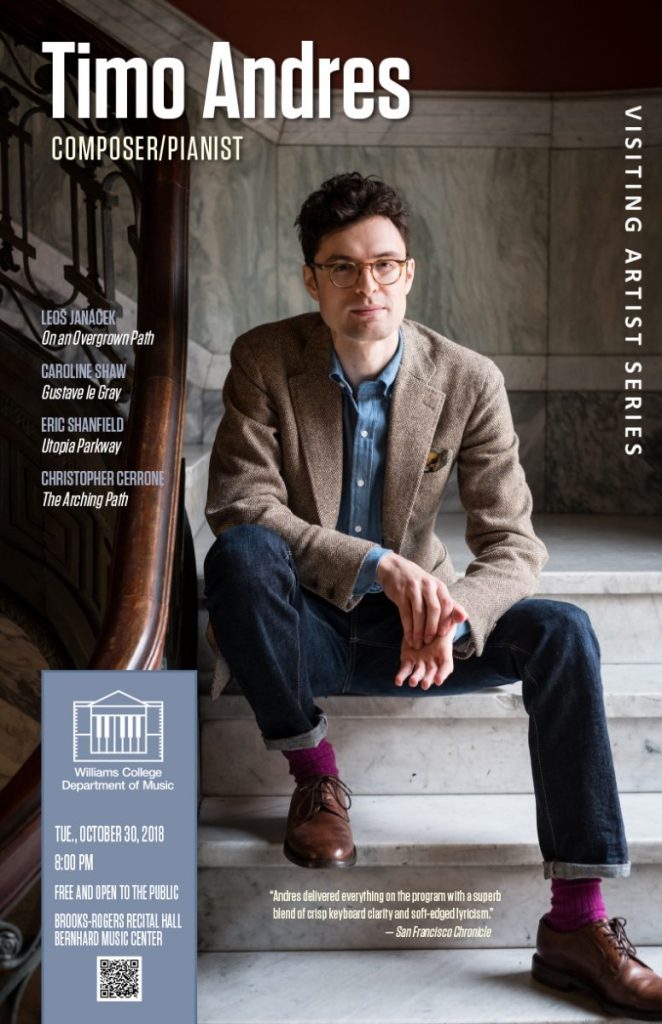 Timo Andres (b. 1985, Palo Alto, CA) is a composer and pianist who grew up in rural Connecticut and now lives in Brooklyn, NY. A Nonesuch Records artist, his newest album of orchestral works, Home Stretch, has been hailed for its “playful intelligence and individuality,” (The Guardian) and of his 2010 debut album for two pianos, Shy and Mighty, Alex Ross wrote in The New Yorker that “it achieves an unhurried grandeur that has rarely been felt in American music since John Adams came on the scene… more mighty than shy, [Andres] sounds like himself.”

Notable works include Everything Happens So Much, commissioned and premiered by the Boston Symphony, led by Music Director Andris Nelsons; Strong Language, a string quartet for the Takács Quartet, commissioned by Carnegie Hall and the Shriver Hall Concert Series; Steady Hand, a two-piano concerto commissioned by the Britten Sinfonia and premiered at the Barbican Centre in London with Andres and pianist David Kaplan; and The Blind Banister, a piano concerto for Jonathan Biss. Co-commissioned by the Saint Paul Chamber Orchestra with Caramoor Center for Music and the Arts, and the Orchestra of St. Luke’s, The Blind Banister was a 2016 Pulitzer Prize Finalist.

As a pianist, Andres has performed solo recitals for Lincoln Center, Wigmore Hall, the Phillips Collection, (le) Poisson Rouge, National Sawdust, and elsewhere. He has toured with Brad Mehldau, and performed the world premiere of a piano concerto by Ingram Marshall—written specifically for him—with John Adams and the LA Phil. He has toured internationally with Philip Glass, performing the complete Piano Études alongside the composer. He recently appeared at the National Arts Centre in Ottawa, where he received the City of Toronto Glenn Gould Protégé Prize; Glass selected Andres as the recipient of this award.

This season Andres writes new works for the Music Academy of the West; for Inbal Segev and Metropolis Ensemble, performed at the Metropolitan Museum of Art in New York; and for Ravinia’s Steans Institute of Music, celebrating their 30th anniversary. He performs the Ingram Marshall Concerto with John Adams and the New World Symphony on the same bill as Mr. Biss performing The Blind Banister; joins Evan Christ and the Orchester Cottbus Staatstheater; offers solo recitals at Bargemusic and for San Francisco Performances; and collaborates with the Kronos Quartet and LA Dance Project.