The Green Room with Dee Dee Bridgewater: Voice out your Thoughts and Emotions 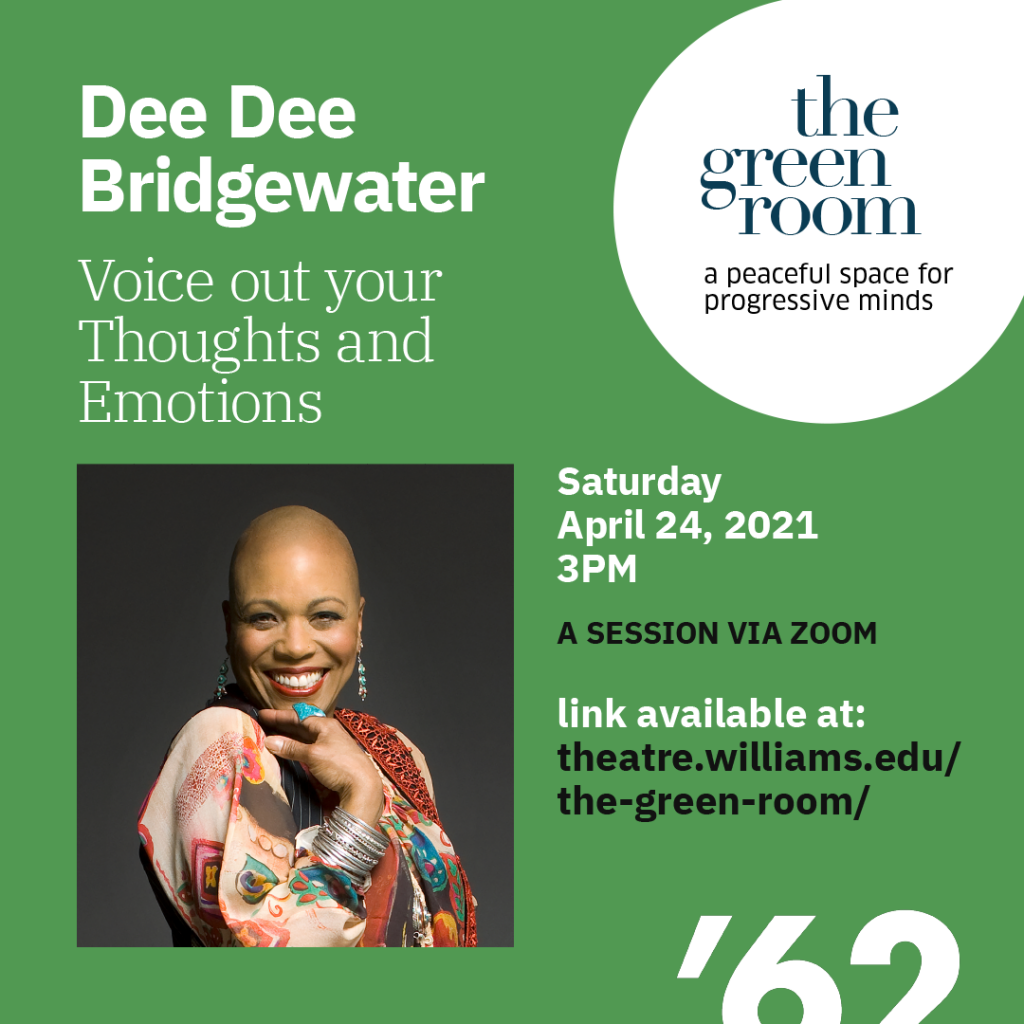 This event was made possible, in part, thanks to Prof. Rashida Braggs

Over the course of a multifaceted career spanning four decades, Grammy and Tony Award-winning Jazz giant Dee Dee Bridgewater has ascended to the upper echelon of vocalists, putting her unique spin on standards, as well as taking intrepid leaps of faith in re-envisioning jazz classics. Ever the fearless voyager, explorer, pioneer and keeper of tradition, the three-time Grammy-winner most recently won the Grammy for Best Jazz Vocal Album for Eleanora Fagan (1915-1959): To Billie With Love From Dee Dee.

Bridgewater’s career has always bridged musical genres. She earned her first professional experience as a member of the legendary Thad Jones/Mel Louis Big Band, and throughout the 70’s she performed with such jazz notables as Max Roach, Sonny Rollins, Dexter Gordon and Dizzy Gillespie. After a foray into the pop world during the 1980s, she relocated to Paris and began to turn her attention back to Jazz. Bridgewater began self-producing with her 1993 album Keeping Tradition (Polydor/Verve) and created DDB records in 2006 when she signed with the Universal Music Group as a producer (Bridgewater produces all of her own CDs). Releasing a series of critically-acclaimed CD’s, all but one, including her wildly successful double Grammy Award-winning tribute to Ella Fitzgerald, Dear Ella – have received Grammy nominations. Artist Theo Croker is signed to DDB Records and Dee Dee recorded Dee Dee’s Feathers with the New Orleans Jazz Orchestra which was released by her label in 2014.

Bridgewater also pursued a parallel career in musical theater, winning a Tony Award for her role as “Glinda” in The Wiz in 1975. Having recently completed a run as the lead role of Billie Holiday in the off-Broadway production of Lady Day, her other theatrical credits include Sophisticated Ladies, Black Ballad, Carmen, Cabaret and the Off-Broadway and West End Productions of Lady Day, for which Bridgewater received the British Laurence Olivier Nomination for Best
Actress in a Musical.

As a Goodwill Ambassador to the United Nations’ Food and Agriculture Organization (FAO), Bridgewater continues to appeal for international solidarity to finance global grassroots projects in the fight against world hunger. She is currently on tour worldwide in support of “Memphis,” her new CD, and in April of 2017 was the recipient of an NEA Jazz Masters Fellows Award with honors bestowed at the Kennedy Center in Washington, D.C. Bridgewater is an ASCAP Champion Awardee, was named a Doris Duke Artist in 2018, and inducted into the Memphis Music Hall of Fame in 2019.