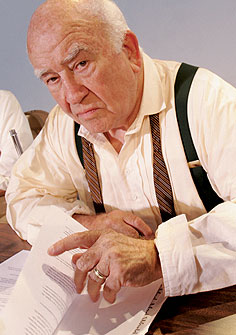 L.A. Theatre Works’ docudrama The Great Tennessee Monkey Trial was adapted from the original trial transcripts of the Scopes Monkey Trial, which famously challenged the ban on teaching the theory of evolution in public schools in 1925. This radio-play-style production of the trial, starring Ed Asner and set in a small-town Tennessee courtroom in 1925, contains many of the key oral arguments in the case and illuminates the debate over freedom of inquiry and the separation of Church and State in a democratic society. This trial highlighted the principle of intellectual freedom as codified in the Bill of Rights, and the subject remains profoundly relevant today as intelligent design debates rage at school boards around the country about the teaching of evolution.

These performances are made possible by the W. Ford Schumann ‘50 Endowment for the Arts, the Lipp Family Fund for Performing Artists, and the Thomas B. Healy ‘50 Fund for Technology and Ethics.