THE BOX - music by living composers 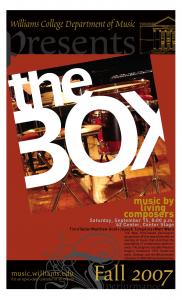 New York based percussion group, TimeTable, kicks off this new series at the ’62 on the Center Center Stage with an evening featuring an infinite variety or percussion instruments and music that pushes at the boundaries of conventional performance. Occupying the entire second half of the program, Mauricio Kagel’s landmark 1977 theater work for percussion trio, Dressur, calls for more than 50 percussion instruments including resonating tables, boxes, and platforms built specifically for the work. Dressur is a tragicomedy that redefines theater in musical terms, calling on the performers to walk, run, dance, grunt, howl, and otherwise test the limits of musical performance. In a series of imagined dances Professor of Music, David Kechley, exploits a vast array of percussion instruments for his Dancing for five percussionists. Giancarlo Vulcano’s Calder Pieces, written for TimeTable in 2003, sets the musicians in motion as pieces of a living sound sculpture. Rounding out a program that explores movement and the sonic possibilities of percussion instruments are energetic and vibrant works composed for TimeTable by Elizabeth Hoffman and Sebastian Armoza.

Known for its intense and riveting performances of contemporary music, TimeTable’s members Matthew Gold, Joseph Tompkins, and Matt Ward invite audiences to experience new and challenging music up close. The group specializes in music for non-conventional instruments that crosses boundaries of style, genre, and discipline. Since its inception in 1999 TimeTable has worked closely with emerging and established composers commissioning, premiering, and recording an ever-growing body of music for percussion.

I asked Marcel Duchamp in 1931 what sort of name I could give these things and he at once produced “mobile.”

Why must art be static?  The next step is sculpture in motion.

i Denotes works written for TimeTable.