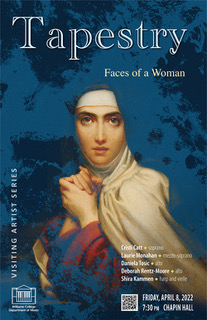 Tapestry made its debut in Jordan Hall with a performance of Steve Reich’s Tehillim, deemed “a knockout” by The Boston Globe. The trademark of the Boston-based vocal ensemble is combining medieval repertory and contemporary compositions in bold, conceptual programming. Critics hail their rich distinctive voices. The LA Times writes “They sing beautifully separately and together with a glistening tone and precise intonation” and The Cleveland Plain Dealer describes Tapestry as “an ensemble that plants haunting vibrations, old and new, in our ears.”

Most recently, Tapestry has expanded their repertoire to include works of impressionists including Debussy, Lili Boulanger and Vaughan Williams for a US tour in celebration of the 100-year anniversary of World War One Armistice, culminating with a performance at the National Gallery in Washington DC. Their newest program, Beyond Borders, builds on their impressionistic discoveries and expands to works of Duke Ellington, Samuel Barber, and Leonard Bernstein programmed with early music and folk songs.

Concert appearances include the Utrecht Early Music and the Maastricht Musica Sacra Festivals, Regensburg’s Tage Alter Musik, the Flanders Festivals of Gent and Brussels, a Banco Republico tour of Colombia, Donne in Musica, Rome; Jordan Hall, Boston; Hildegard von Bingen Symposium at the University of Oregon, Eugene; Kalamazoo Medieval Conference, MI; Frick Collection and Rockefeller University, NY; Harvard University, Da Camera of Houston; Early Music Concert Series, Boulder; Denver’s Newman Performing Arts Center; Da Camera Society LA; Stanford University, Museum Concert, Cleveland, festivals in Ottawa and Montreal, and many others. Tapestry also performed Steve Reich’s Tehillim under the baton of Marin Alsop with the Colorado and Cabrillo Festival Symphonies. The ensemble toured Latvia and performed at the Moscow Conservatory. Recent performances include American Dreams at the Library of Congress and New York City’s Frick Collection and Between Heaven and Hell at the Bucerius Foundation in Hamburg, which was broadcast by the Norddeutsche Radio. The ensemble was founded at the Longy School of Music and is in residence at First Church Congregational in Cambridge MA. Tapestry has made 4 recordings with Telarc International: Angeli, Music of Angels; Hildegard von Bingen: Celestial Light; Song of Songs – Come into my Garden; and The Fourth River. To date Tapestry has made 2 recordings with German Label, MDG: Sapphire Night and Faces of a Woman. Sapphire Night won the Echo Prize, Germany’s highest honor for a recording and The Fourth River is a past winner of Chamber Music America Recording of the Year.

Tapestry is presented by the Williams College Department of Music with the generous support of the W. Ford Schumann ’50 Performing Arts Endowment.