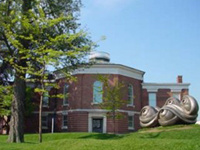 Haendel’s drawings, often uncanny renderings, pointedly remove images from their original context— media publications, frozen food labels, medieval knights—and reconfigure them through scale, black and white tonality, and juxtaposition into a new of visual language.  It is through this manipulation and repacking of pre-existing imagery that Haendel is able to present keen criticism on contemporary socio-cultural relations, demanding the viewer to draw his or her own.

Karl Haendel was born in 1976 in New York and currently lives and works in Los Angeles. He received his BFA from Brown University in 1998 before attending the Whitney Museum Independent Study Program and the Skowhegan School of Painting and Sculpture.  He received his MFA from the University of California, Los Angeles in 2003.  His work has been included in recent biennials and institutional group shows such as the 2014 Whitney Biennial, New York; the 12th Biennale de Lyon, Lyon, France (2013); and The Residue of Memory, Aspen Art Museum, Colorado (2012).  Recent exhibitions include Pink Cup and the Facts, Mitchell-Innes & Nash, New York, NY (with Jay DeFeo) (2017); By and By, Susanne Vielmetter Projects, Los Angeles, CA (2017); Karl Haendel and Tony Lewis, LAXArt, Los Angeles, CA (with Tony Lewis) (2016). His works are in the public collections of the Museum of Contemporary Art, Los Angeles; The Museum of Modern Art, New York; and the Guggenheim Museum, New York.