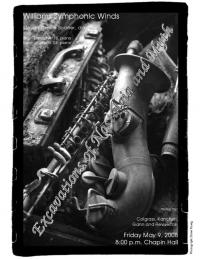 Conducted by Steven Dennis Bodner, The Williams College Symphonic Winds will present its final concert of the academic year on Friday, May 9, at 8 p.m. in Chapin Hall on the Williams College campus. This free event is open to the public.

While in our post-modern (or post-postmodern) era it is virtually impossible to write a musical work that is not situated in some relationship with past (musical or extra-musical) traditions, each of the four works presented tonight takes this relationship as the central theme. Evoking mythological rites, mariachi bands, Georgian singers, stride pianists, and singing shamans, tonight’s concert attempts to excavate past musical traditions in the hopes of offering new visions for the future.

The concert will feature the American premiere of Kyle Gann’s Sunken City (Concerto for Piano and Winds in Memoriam New Orleans) (2007), with Brian Simalchik ’10 and Noah Lindquist ’08 as soloists. Gann was new-music critic for the Village Voice from 1986 to 2005, and since 1997 he has taught music history and theory at Bard College. Gann often writes microtonal music, and he has described his style as largely post-minimalist. Inspired by Spike Lee’s documentary When the Levees Broke about the government’s reaction (or lack thereof) to the devastation wreaked by Hurricane Katrina, Kyle Gann has tried to evoke two notions of New Orleans—one before the storm, and one after—in his Sunken City. As Gann writes, “The first movement is pure fun, the Mardi Gras New Orleans of my imagination, a stylized portrait of the energy level and harmonic language of the 1920s music of Jelly Roll Morton, Louis Armstrong, and Bix Beiderbecke…. The much longer second movement is a kind of interrupted chaconne…. Successive variations suggest stages of grief, outrage, nostalgia, and acceptance, but finally the piano drifts into Jelly Roll Morton’s Dead Man Blues (or rather, its chord changes, with some abstracted bits of the tune).” Sunken City was commissioned and premiered in October 2007 by Orkest de Volharding with pianist Geoffrey Douglas Madge.

The concert will open with the recently-rediscovered original chamber version of Silvestre Revueltas’s Sensemayá: Chant for the Killing of the Snake (1938). While the work is well-known in its version for large orchestra (no doubt in part to Leonard Bernstein’s 1960s recording of this brilliant showstopper), it was originally conceived for an intimate ensemble of only sixteen musicians. Based on the homonymous work of the Cuban poet Nicolas Guillen, Sensemayá captures the atmosphere and mood of the poem by closely following its structure, at times even mirroring the rhythms of certain words or phrases. While during his brief life, Revueltas (1899-1940) was overshadowed by his Mexican countrymen Carlos Chavez, today he is regarded as one of the most significant composers from the first half of the twentieth century, owing primarily to his unique ability to evoke and capture the spirit of indigenous Mexican folk musics without resorting to “normalizing” or trivializing the material.

Likewise, Georgian composer Giya Kancheli has further advanced Revueltas’s view of traditional musics. He has professed to often being overcome by a bitter sense of nostalgia, a longing for the past. When he was living in Berlin, he was asked by the organizers of the music festival in Witten to write a piece containing Georgian folk tunes; he declined, stating that he did not want to use folk music in his work. As Kancheli writes, “Georgian music is a unique phenomenon. I say this quite consciously, as I believe that it is music created by great people whose names we do not know. For me they remain the great and anonymous. What does ‘folk music’ mean anyway? I understand this music as a form of composed music. And the more I admire the composers, the more clearly I understand that I have no right to interfere with what they created. I avoid using folkloric material in my works; my dream, on the other hand, is to come closer to the spiritual sphere of sacred chant.” In the end, Kancheli relented and composed Magnum Ignotum (1994) for 10 instruments and tape, integrating recordings of authentic Georgian “folk music” performances into the haunting and serene instrumental texture to evoke both the timelessness of the past and its continuity with the present.

The final work on the program is Michael Colgrass’s Winds of Nagual (1985), based on the writings of Carlos Castaneda about his 14-year apprenticeship with don Juan Matis, a Yaqui Indian sorcerer from Northwestern Mexico. “Extraordinarily visual, story-telling music” (Richard Dyer, Boston Globe), Winds of Nagual is Colgrass’s attempt “to capture the mood and atmosphere created by the books and to convey a feeling of the relationship that develops as a man of ancient wisdom tries to cultivate heart in an analytical young man of the technological age.”With a personal compositional technique that draws on a diversity of styles, reflecting his widespread interests, Colgrass has an uncanny ability to write music that simultaneously challenges the intellect and stirs the emotions. He is the recipient of many accolades, including two Guggenheim Fellowships, a Rockefeller Grant, the 1978 Pulitzer Prize for Music for Déjà vu and an Emmy Award in 1982 for the Public Broadcasting System documentary “Soundings: The Music of Michael Colgrass.” Winds of Nagual won First Prize in the Barlow and Sudler International Wind Ensemble Competitions in 1985.

The Williams Symphonic Winds is a 50-member ensemble dedicated to presenting performances of the most significant music written for the chamber and large wind ensemble mediums. Now in his eighth year as music director, Steven Dennis Bodner has developed the ensemble’s identity as a leading proponent of the performance of new music on campus. The ensemble has commissioned and premiered a number of works by contemporary composers, including Williams faculty and alumni. Recognized as one of the premier wind ensembles in New England, the Symphonic Winds performed at the 2006 College Band Directors National Association Eastern Division Conference. In recent years, the Symphonic Winds has been noted for its adventurous and creative programming, reflected in numerous thematic concerts that seek to present traditional and contemporary works in provocative juxtapositions. The recent performance repertoire of the Symphonic Winds ranges from the Baroque to the present and includes original music of Purcell, Mozart, Milhaud, Ives, Revueltas, Weill, Piazzolla, Vaughan Williams, Copland, and Bernstein; as well as music of today’s leading composers, such as Louis Andriessen, John Adams, John Corigliano, Michael Colgrass, Richard Danielpour, Michael Gandolfi, Kenneth Hesketh, Karel Husa, David Maslanka, Einojuhani Rautavaara, and Steve Reich.