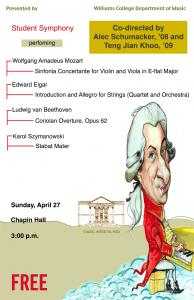 The Williams Student Symphony is a full orchestra conducted and administered by students, under the tutelage of Ronald Feldman, Artist in Residence in orchestral/instrumental music and Conductor of the Berkshire Symphony Orchestra . The Student Symphony performs twice per year.

Past repertoire has included traditional orchestral works such as Tchaikovsky’s Swan Lake Suite, Grieg’s Peer Gynt Suite, Brahms’ Tragic Overture, and Smetana’s Moldau. The orchestra has also performed 20th-century American music by Ives, Copland, and Barber. In addition, award-winning composer Donald Erb visited the Symphony to supervise a rehearsal of Treasure in the Snow, a work of his which was then presented in a spring concert. The Symphony also performs works by student composers, including Celestial Episode by Judd Greenstein ’01 and Gesture I by Andrea Mazzariello ’00.