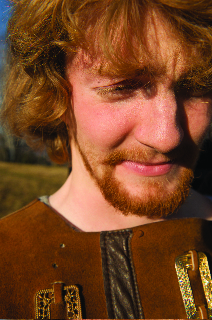 Called Shakespeare’s ‘neglected masterpiece’ by the Royal Shakespeare Company, King John ruthlessly examines power politics while encompassing some of Shakespeare’s most soaring verse, here spoken by a cast of fascinating and impassioned miscreants of nobility who will stop at nothing to climb to the top.

King John unfolds on the charged battlefield of political and moral ideals. England is preparing for war with France to defend John’s title when the arrival of the Pope’s legate throws the two precariously balanced kingdoms into even greater upheaval as a world dependent on religious and political alliances sinks into a fog of violence and emerges utterly transformed. Senior Lydia Barnett-Mulligan (Someone Who’ll Watch Over Me, The Tempestt) takes on this brutal and captivating play with a company of seventeen actors, playing at Adams Memorial Theatre this December.