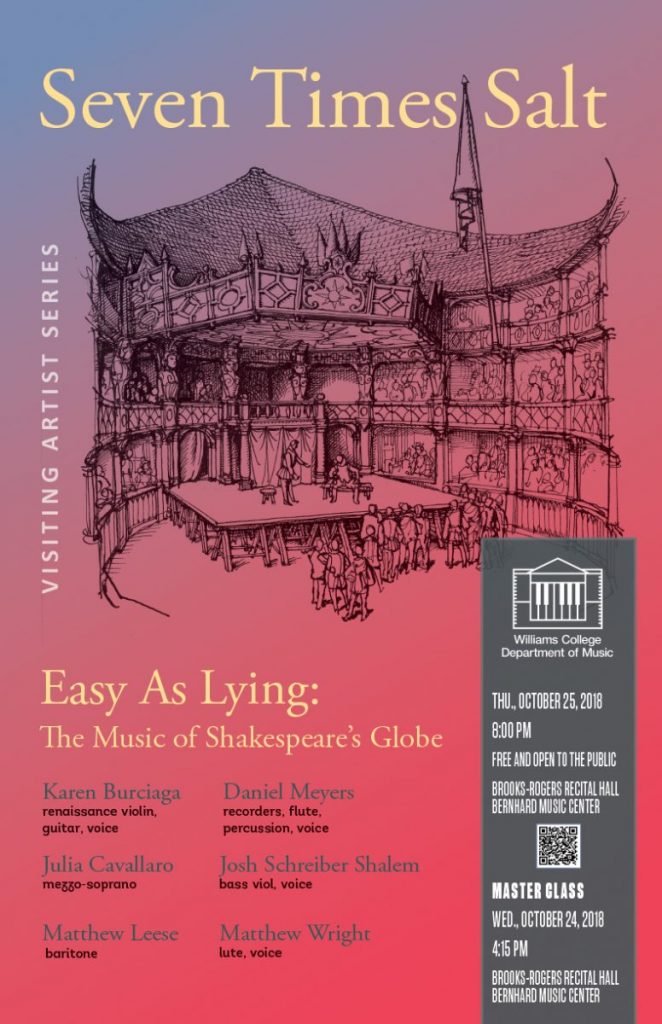 Seven Times Salt offers an evening of music inspired by William Shakespeare, “Easy As Lying: The Music of Shakespeare’s Globe.” This spirited musical celebration was conceived in honor of William Shakespeare’s 450th birthday. The group presents some of the songs the Bard mentions by name, as well as works by his musical contemporaries including Morley, Ferrabosco, Byrd, Dowland, and Robert Johnson. Also included are choice excerpts from his plays read aloud by Seven Times Salt’s finest thespians. Dances from the Elizabethan and Jacobean courts and a saucy ballad or two round out the evening’s festivities!

Seven Times Salt is a Boston-based early music ensemble specializing in repertoire of the 16th and 17th centuries. Praised for creative programming and an “impeccably balanced sound,” STS has performed since 2003 at venues throughout New England including Boston’s Museum of Fine Arts, The Isabella Stewart Gardner Museum, Plimoth Plantation, the New England Folk Festival, WGBH radio, and many others. We have also researched and presented original programs for the Amherst, Bloomington, and Boston Early Music Festivals (Fringe), the Society For Historically Informed Performance, and our own self-produced concert series. We delight in blurring the lines between “art music” and folk tunes, and feel at ease performing in the concert hall, the dance hall, or the beer hall!