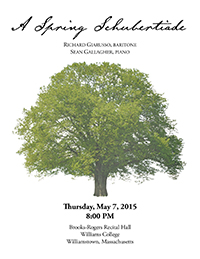 Baritone Richard Giarusso ’00 and pianist Sean Gallagher will present a recital of Schubert lieder in Brooks-Rogers Recital Hall on the evening of Thursday, May 7 at 8:00 PM. Giarusso and Gallagher will lead a masterclass with Williams students on Friday, May 8 from 1:00 to 3:00 PM, also in Brooks-Rogers. Both events are free and open to the public.

The Thursday concert features some of the most exceptional self-standing songs that Schubert wrote in the last three years of his life — a period of remarkable creativity that also saw the completion of Winterreise and Schwanengesang, along with the last three piano sonatas and the C Major String Quintet. The distinctive rhetoric of these magisterial late works is reflected in the smaller but no less dramatic canvas of the individual songs featured on this program.

Giarusso and Gallagher have presented joint recitals at Harvard University, New England Conservatory, and Georgetown University, and both maintain distinguished careers as scholar-performers. After graduation from Williams, Giarusso earned the PhD in historical musicology at Harvard, and he currently serves as Chair of the Department of Musicology at the Peabody Conservatory of the Johns Hopkins University in Baltimore. He maintains an active career as a singer and conductor throughout the mid-Atlantic. Gallagher studied with Leon Fleisher at Peabody and later earned a PhD in historical musicology at Harvard. He has performed with orchestras and in solo and chamber recitals in numerous American and European cities, including Washington D.C., New York (Weill Recital Hall), Amsterdam, and Siena. He taught at the University of North Carolina at Chapel Hill, Harvard, and Boston University, before joining the musicology faculty at the New England Conservatory in 2013.