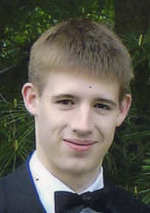 The Williams College Department of Music will present a Junior Recital featuring Richard McDowell ’09, baritone on Sunday, May 11, at 5 p.m. in Chapin Hall. This free event is open to the public.

McDowell will be singing Schumann’s Dichterliebe. He will be accompanied by Elizabeth Schwartzman ‘08 on the piano.

Richard McDowell began singing at age 10 after being dragooned into the middle school choir by his music teacher. He has since learned to sing voluntarily. Richard began his classical studies under G. Alan Wagner of West Chester University, and now studies with Keith Kibler. His performances at Williams include St. John’s Passion with Williamstown Early Music and the title role in Sweeney Todd. A native of Pennsylvania, Richard is currently a junior at Williams majoring in mathematics and economics.