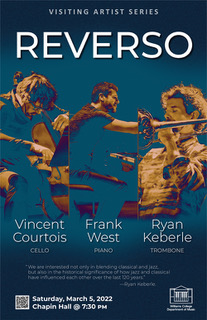 Among the many reasons American trombonist Ryan Keberle and French pianist Frank West started their co-led ensemble, Reverso, was that both saw their music as a two-way street. “We were interested not only in blending classical and jazz, but also in the historical significance of how jazz and classical have influenced each other over the last 120 years,” says Keberle. “And, still to this day, many musicians —Frank and I included — straddle both worlds.”

“I love the chamber music vibe that we have with this band,” adds West. “Of course, this is jazz, because it’s very it’s improvised, but at the same time you can hear the classical background in it.”

That was certainly true of Suite Ravel, the group’s debut which took inspiration from the music of Maurice Ravel — particularly the piano suite “Le Tombeau de Couperin” — to create an album of classically informed jazz. With The Melodic Line, Reverso digs even deeper into the possibilities of classical/jazz cross-pollination by looking into the music of Les Six, a group of early 20th Century French composers whose members included Darius Milhaud, Francis Poulenc, Arthur Honneger, and Germaine Tailleferre.

The general public is welcome to events in the Bernhard Music Center!  Members of the public should wear masks and show proof of full vaccination including a booster, if eligible. Williams students, faculty, and staff only need to show Williams IDs at the door.