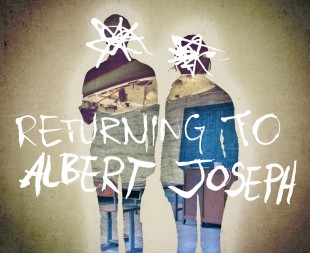 In a society where rational thinkers are heroes and those who don’t fit are forgotten, Andrea and Leo are two strangers brought together under extraordinary circumstances. After witnessing an unspeakable act of violence, Leo’s mind goes blank and the two are forced to run. Hiding together in a long abandoned schoolhouse, Andrea attempts to fix Leo. Together they dive into their memories, but in attempting to save each other they risk destroying themselves.

Haunting and deeply funny, Returning to Albert Joseph is about losing nouns, losing the plot, and more generally loss. It’s about how we remember, why we forget and what remains when our words are gone.

The Satori Group brings its work to the east coast for the first time with Returning to Albert Joseph. The production is a homecoming of sorts. Founding members Caitlin Sullivan ’07 (RtAJ director and Satori Group Artistic Director) and Spike Friedman ’07 (RtAJ playwright) first collaborated in the Adams Memorial Theatre in college and are excited to return with their most recent project bringing along an amazing creative team which includes seven Williams alums and two current students.

“touching meditation on love, education, and family through boat analogies and civil strife”

“an interesting and fiercely intelligent take on dystopian storytelling, one where knowledge becomes the oppressor of emotion, and therefore humanity”

*denotes member of the Satori Group

About the Satori Group:

The Satori Group was founded in 2007 by a group of graduates from Williams College and UC’s College Conservatory of Music (CCM). The company has been based in Seattle since 2008, where they have quickly gained recognition for their intimate, immediate, and meticulously crafted brand of storytelling. Developed through a highly collaborative process, Satori shows combine detailed theatrical worlds and poetic narrative structures with well-lived in, nuanced performances and an extreme attention to the audience experience.

“Everything Satori Group does feels like a mapping of what it means to be human on either side—the before and after—of collapse and catastrophe. They have crazy Joyce-level ambitions to force us into engaging with their work and to create theatrical conditions that spark something more deeply resonant than simply watching another well-made play.” – THE STRANGER

Spike Friedman (Playwright) is a founding member of the Satori Group, a Seattle based experimental theater company where he has written a number of Satori’s generative projects including Returning to Albert Joseph, The Land Is Always Known, Microdramas, Winky, and Linedry. Spike’s written work can be regularly found online (and occasionally in print) at Grantland, The Stranger, Deadspin, Paste, and Mental Floss. Spike received a BA in Theatre and Economics from Williams College in Williamstown, MA, and hails from Los Angeles, CA.

Caitlin Sullivan (Director) is a director specializing in new theatrical work. She is the Artistic Director of the critically acclaimed Satori Group (2014 Stranger Genius Award Nominees), a Seattle based ensemble which she co-founded. Caitlin has developed and/or directed nine shows with Satori including Returning to Albert Joseph. Next up with Satori: Getting There, in collaboration with Dipika Guha, The Land is Always Known with The Bengsons, and a site-specific collaboration with Jess K. Smith’s ARTBARN, to debut at the Georgetown Steam Plant in 2016. Caitlin is also the Artistic Director of the Williams College Summer Theatre Lab, where she has developed new plays by The Bengsons, Mallery Avidon, Dipika Guha, Martyna Majok, Amanda Keating and others. She is an alum of the Drama League Directors Project and a graduate of Williams College.

Quinn Franzen (Leo) was last seen onstage as Doug in the New York premiere of Threesome at 59e59 Theaters, after originating the role at Portland Center Stage and touring the show to Seattle. A member of the Satori Group, Quinn originated the role of Leo in Returning to Albert Joseph. He also co-developed and performed in Satori’s acclaimed reWilding, The Land is Always Known, and Fabulous Prizes. Other Seattle credits include: Louis in Angels in America pts. 1 & 2, Romeo in Romeo and Juliet, and Frank in Dirty Story (Intiman Theatre); Stapleton in Hound of the Baskervilles (Seattle Rep); Cassio in Othello, and Algernon in Importance of Being Earnest (Seattle Shakes). He has done a number of commercial and television projects including a spot on NBC’s Grimm. He has trained with Pig Iron, The Market Theatre in Johannesburg, Shakes and Co., and LAMDA. Quinn holds a BA in theatre from Williams College. Next up: Mercutio in Seattle Shakes’ Romeo and Juliet.

Alex Highsmith (Andrea) is truly, madly, deeply honored to be working, for the first time(!), with The Satori Group on this beautiful play. A native of Utah, Alex made her way to Seattle after graduating with a BFA from Boston University in 2011. Most recently seen in Seattle as Harper in The Intiman Theater’s ANGELS IN AMERICA and as Gastarea in Cafe Nordo’s world premier of DON NORDO DEL MIDWEST, she realized quickly she’d found her artistic home in The Evergreen State. She would like to thank The Satori Group for their vision and open hearts, the creative team for their refusal to settle for anything but the best, and anyone who’s ever remembered what caring feels like. Love and beans to all!

Cate McCrea (Scenic Design) is a New York-based set designer and theater maker. This is her second production with The Satori Group: in 2014 she designed sets for the Seattle production of Returning to Albert Joseph. NYC credits include The Subtle Body at 59E59 and SOLDIER, an immersive solo show at HERE. Recent assistant set design for the Public, Roundabout, MTC, The Acting Company and The Civilians. Cate graduated from Williams College in 2013.

Greta Wilson (Costume Design) is a founding member of the Satori Group. Her costume design for Satori has been seen in the Seattle production of Returning to Albert Joseph (co-design with Doreen Sayegh), Tragedy: a tragedy, and Making of a Monster. She has performed with Satori as Phoebe in The Land is Always Known, as Agnes in Satori’s reWilding, Winky in Winky, and was featured on the album “Music for reWilding” by This Bitch Don’t Fall Off. She has trained with Pig Iron, the Frank Theatre, and The Market Theatre in Johannesburg, and holds a BA in Theatre from Williams College (’07).

Eben Hoffer (Sound Design) is a performer and sound designer, originally from Portland, OR. He is co-artistic director of Tugboat Collective, eternally striving to join the Thoughtful with the Stupid. Tugboat: Choreographer, The What Dance, Poor Sailor; Composer Moon & Marble, Sound Design Jack The Bird, Obedient Steel. His work can also be seen with Royal Osiris Karaoke Ensemble and Theater Reconstruction Ensemble. He makes music with bands The Copper Look and Frustrator. Next major project: ROKE’s The Art Of Luv, Part 1 at the Under The Radar Festival, January 2016.

Clare Strasser (Design Dramaturg/Production Stage Manager) is a designer and collaborative theatre artist. She is a founding member of the Satori Group. With them she has designed iLove:, Tragedy: a tragedy, Fabulous Prizes, reWilding, and has worked on many other projects. She has also designed with PE|Mo, Queer Teen Ensemble Theatre, Seattle Public Theater, Washington Ensemble Theatre, Book-It Repertory and the Know Theatre of Cincinnati.