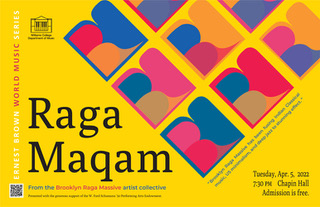 The Visiting Artist Series features the guest artists of Raga Maqam, which is part of the collective Brooklyn Raga Massive.

Brooklyn Raga Massive (BRM) was officially founded in 2015, but its seeds as a collective were planted in 2012 during a weekly jam session at a local Prospect Heights venue. What began as a casual weekly event flourished and grew into a mainstay of the New York City arts scene, cultivating a vibrant community of diverse musicians and music lovers. In keeping with the democratic spirit of these jam sessions, the collective is composed of 50+ collaborating musicians rooted in traditional South Asian, Indian classical, and other musical forms.

BRM ensembles have partnered with artists from over a dozen countries including Mali, Cuba, Bolivia, and Iraq in styles from jazz and minimalism to rock and klezmer to reach audiences of all ages and races. This practice of cross-cultural collaboration both reflects the current global landscape and enables BRM to serve as an incubator of an expansive, inclusive new genre of music indigenous to Brooklyn.

The master musicians of Raga Maqam:

Raga Maqam is presented by the Williams College Department of Music with the generous support of the W. Ford Schumann ’50 Performing Arts Endowment.
Raga Maqam is part of the Ernest Brown World Music Series.