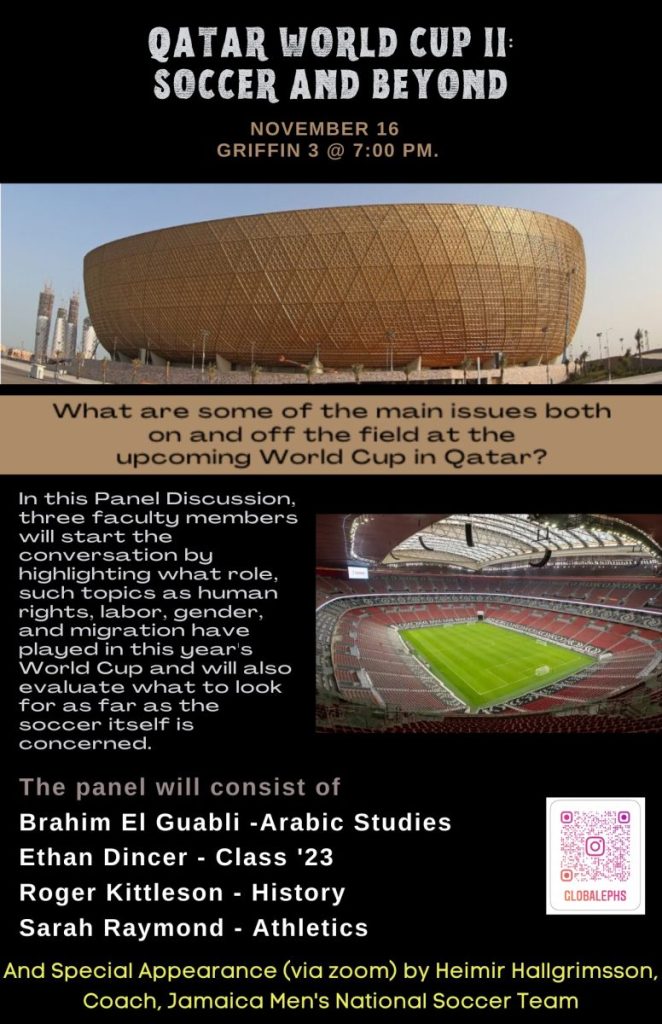 To view the recording of this panel event, click here.

Roger Kittleson is Chair and Professor of History. His teaching ranges across Latin American history from the European invasion to the present, with a special interest in political and cultural history in the nineteenth and twentieth centuries. His second book, The Country of Football, focused on the construction of identities in Brazilian soccer from the 1890s to the eve of the 2014 World Cup.

Sarah Raymond, Assistant Professor of Physical Education and Head Women’s Soccer Coach, is a native of Darwin, Australia, Raymond was a member of the Australian Women’s National Team from 1991 to 2001, playing in the 1995 and 1999 FIFA Women’s World Cup tournaments. Additionally, Raymond was the captain of the Australian team in 1996, and she also represented the World All-Stars team in a pair of 12-game exhibition tours against the United States National Team in both 1999 and 2000. She has been head women’s soccer coach at Williams since July 2019, have served as Assistant Head Coach for four years prior.

Ethan E. Dinçer is a senior pursuing a double major in American Studies and Political Science. His thesis in American Studies investigates Palestinian masculinity and material culture under an interdisciplinary theoretical framework of bodily violence, temporality, and settler colonialism. He is also the Senior Editor of JDEED Magazine, the premier independent publication of fashion and art in the Middle East, as well as the Senior Analyst of the Middle East Programme at London Politica, the world’s largest pro bono political risk advisory.

Heimir Hallgrímsson is the Coach of Jamaica Men’s National Team (Reggae Boyz). He is an Icelandic former football player, coach and a dentist and was most recently head coach at Qatari League Club Al Arabi from 2018 to 2021. Before then, he head coach for his native Iceland from 2013-2018, leading Iceland to the quarterfinals at Euro 2016 in France. Hallgrimsson also led Iceland to their first ever FIFA World Cup appearance in 2018 in Russia.