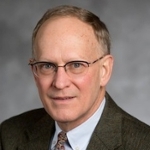 Stephen A. Crist of Emory University offers a Class of 1960 Lecture titled, End of the Line: Situating the Only Known Composition by the Last Professional Musician in the Bach Dynasty. This lecture tells a scholarly detective story about a late 18th-century manuscript attributed to “J. P. Bach,” acquired by the Riemenschneider Bach Institute in 2016. The case will be made that the set of ten variations on a traditional Scottish song for cello and keyboard contained in this manuscript was written by none other than Johann Philipp Bach (1752-1846), the very last surviving professional musician in the Bach dynasty. The presentation will conclude with the modern world premiere of this charming piece, performed by Professor Crist and Nathaniel Parke, Williams College Artist Associate in Cello.

Stephen A. Crist works largely in European music of the sixteenth through the eighteenth centuries, with additional interests in hymnody and jazz. His book on Dave Brubeck’s iconic Time Out album is forthcoming from Oxford University Press. He served as contributing editor of Bach in America (University of Illinois Press) and contributing coeditor of Historical Musicology: Sources, Methods, Interpretations (University of Rochester Press). Recent papers include work on the vocal music of J. S. Bach; the music of two of Bach’s most famous students, Johann Ludwig Krebs and Lorenz Mizler; the origins and reception of Lutheran hymnody; and jazz, especially Brubeck and Miles Davis. His publications have appeared in many books and journals, including The Cambridge Companion to Bach, Exploring Christian Song, Bach (Journal of the Riemenschneider Bach Institute), Bach Perspectives, Notes (Quarterly Journal of the Music Library Association), Understanding Bach, and the Journal of Musicology. He also contributed the entry on “Johann Sebastian Bach” for Oxford Bibliographies Online: Music. He was a Senior Fellow at the Bill and Carol Fox Center for Humanistic Inquiry and is a member of the Associated Faculty at the Center for the Study of Law and Religion. He is past president of the American Bach Society and of the Society for Christian Scholarship in Music. He also served two terms as chair of Emory’s Music Department, and as director of graduate studies. Crist received his Ph.D. (music history) from Brandeis University, after an M.M. (music theory) from the University of South Florida, and a B.A. (English and American literature and language) from Harvard University. 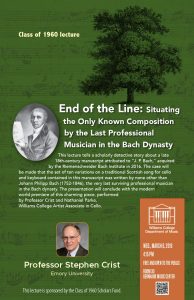