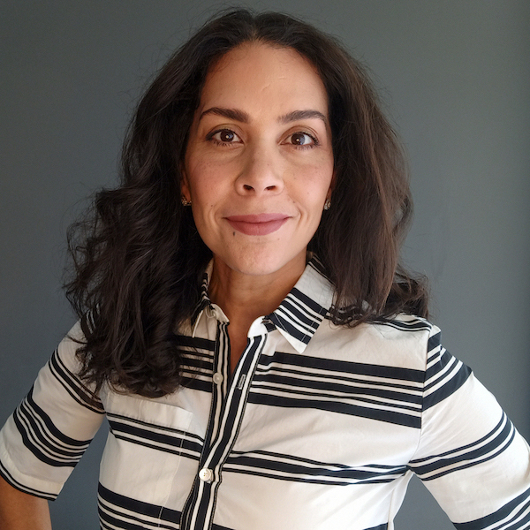 The mapalé is an Afro-Colombian dance that showcases a dancing body’s rhythmic physical dexterity to exuberant drumming and singing. Its origin story, like most popular dance forms from Latin America, emerges from the transatlantic slave trade. In Colombian folkloric dance shows, the mapalé emphasizes a stereotype: the erotic-exotic spectacle of Black dancing bodies. This representation misses the nuanced vitality and sensuality that the mapalé has for Afro descended people. Colombian contemporary dance company Sankofa Danzafro’s La Mentira Complaciente (2019) offers a powerful response to such stereotyping. This talk will consider how choreographer Rafael Palacios and the dancers of Sankofa Danzafro establish alternative narratives about not only the mapalé but Blackness in contemporary Colombia.

Dr. Melissa Blanco Borelli is a critical dance studies scholar, choreographer, and cultural critic. She is an Associate Professor of Theatre and the Director of the Dance Program at Northwestern University. She has been on faculty at MIT, University of Surrey (UK), Royal Holloway, University of London (UK) and the University of Maryland, College Park.

As an interdisciplinary scholar, her research interests are broad. They include Blackness in Latin America, critical dance studies, performative writing, popular dance on screen, Black performance theory, (Black) feminist (auto)ethnography, historiography, archives, and the digital humanities. She was the Principal Investigator in a UK Arts and Humanities Research Council and Colciencias funded grant project (2018-2021) that focused on embodied performance practices, memory, and archives. Blanco Borelli and her co-researchers at the Universidad de Antioquia worked with Afro-Colombian and indigenous communities affected by the Colombian armed conflict and created a web-based digital archive that highlights their worldmaking creative practices. The archive can be found at www.corpografias.com and her collaborative research on performance, embodiment and the digital continues via www.perbodigital.com. She is currently working on a book tentatively titled Choreographies of Displacement in Contemporary Colombia which looks at the function of corporeality in Colombian dance, protest movements, theatre, photography, music, and film.

She is the author of She is Cuba: A Genealogy of the Mulata Body which won the Dance Studies Association’s De la Torre Bueno Prize® for best book in dance studies in 2016. She is also the editor of The Oxford Handbook of Dance and the Popular Screen (2014). Most recently, she received the UK’s Theatre and Performance Research Association (TaPRA) Best Edited Collection prize in 2022 for the special issue of Contemporary Theatre Review “Outing Archives/Archives Outing” she co-edited with Professor Royona Mitra (Brunel University) and Professor Bryce Lease (Royal Central School of Speech and Drama). She received honorable mention for Gertrude Lippincott Award (2009) for her essay “Y ahora qué vas a hacer, mulata?” Her scholarly work appears in journals such as The Black Scholar, Contemporary Theatre Review, Women & Performance: a journal of feminist theory, The International Journal of Screendance and in numerous anthologies including Black Performance Theory, The Oxford Handbook of Dance and Competition, Zizek and Performance and The Oxford Handbook of Screendance. Forthcoming publications include chapters in The Oxford Handbook of Black Dance, Theatre History Survey journal, and the Routledge Companion to Bodies in Performance co-edited by Hershini Young, Victor Ramirez Ladrón de Guevara and Roberta Mock. She was the President of the Dance Studies Association from 2019-2022. She has written op-eds which have appeared in The Feminist Wire and The Huffington Post. Her PhD mentoring was recognized with a Mentor of the Year Award 2021 from the University of Maryland, College Park.

She is affiliated faculty in Performance Studies at Northwestern University. Blanco Borelli is also on the editorial board for Contemporary Theatre Review and the series co-editor (with Wendy Arons and Elizabeth Son) of Women’s Innovations in Theatre, Dance, and Performance (Bloomsbury).

Some fun facts: She is a polyglot (6 languages), plays the piano, and loves to run.