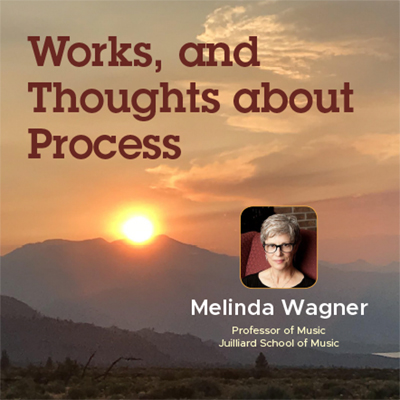 Prof. Melinda Wagner gives a Class of 1960 Lecture in the music department touching on works, and thoughts about process. Her talk is followed by a performance of one of her recent pieces, My Tioga, performed by Cassatt String Quartet, who recently premiered the work.

Celebrated as an “…eloquent, poetic voice in contemporary music…” [American Record Guide], Melinda Wagner’s esteemed catalog of works embodies music of exceptional beauty, power, and intelligence. Wagner received widespread attention when her colorful Concerto for Flute, Strings and Percussion earned her the Pulitzer Prize in 1999. Since then, major works have included Concerto for Trombone, for Joseph Alessi and the New York Philharmonic, a piano concerto, Extremity of Sky, commissioned by the Chicago Symphony for Emanuel Ax, and Little Moonhead, composed for the Orpheus Chamber Orchestra, as part of its popular “New Brandenburgs” project.

Noted for its “…prismatic colors and…lithe sense of mystery…” [Washington Post], Extremity of Sky has been performed by Emanuel Ax with the National Symphony (on tour), the Toronto and Kansas City Symphonies, and the Staatskapelle Berlin.

Championed early on by Daniel Barenboim, Wagner has received three commissions from the Chicago Symphony; the most recent of these, Proceed, Moon, is to be premiered by the CSO under the baton of Susanna Mälkki in 2017. Other recent performances have come from the American Composers Orchestra, the United States Marine Band, BMOP, the American Brass Quintet, the Empyrean Ensemble, and the Philadelphia Chamber Music Society.

A passionate and inspiring teacher, Melinda Wagner has given master classes at many fine institutions across the United States, including Harvard, Yale, Eastman, Juilliard, and UC Davis. She has held faculty positions at Brandeis University and Smith College, and has served as a mentor at the Atlantic Center for the Arts, the Wellesley Composers Conference, and Yellow Barn. Ms. Wagner currently serves on the faculty of the Juilliard School of Music.

Acclaimed as one of America’s outstanding ensembles, the Manhattan based Cassatt String Quartet has performed throughout North America, Europe, and the Far East, with appearances in London for the Sapphire Jubilee Celebration of Queen Elizabeth II, the Beijing Modern Music Festival, New York’s Alice Tully Hall and Weill Recital Hall at Carnegie Hall, the Tanglewood Music Theater, the Kennedy Center and Library of Congress in Washington, DC, the Theatre des Champs – in Paris and Maeda Hall in Tokyo. The Quartet has been presented on major radio stations such as National Public Radio’s Performance Today, Boston’s WGBH, New York’s WQXR and WNYC, and on Canada’s CBC Radio and Radio France.

Formed in 1985 with the encouragement of the Juilliard Quartet, the Cassatt initiated and served as the inaugural participants in Juilliard’s Young Artists Quartet Program. Their numerous awards include a Tanglewood Chamber Music Fellowship, the Wardwell Chamber Music Fellowship at Yale (where they served as teaching assistants to the Tokyo Quartet), First Prizes at the Fischoff and Coleman Chamber Music Competitions, two top prizes at the Banff International String Quartet Competition, two CMA/ASCAP Awards for Adventurous Programming, a recording grant from the Mary Flagler Cary Charitable Trust, and commissioning grants from Meet the Composer and the National Endowment for the Arts. In 2004, they were selected for the centennial celebration of the Coleman Chamber Music Association in Pasadena, California.