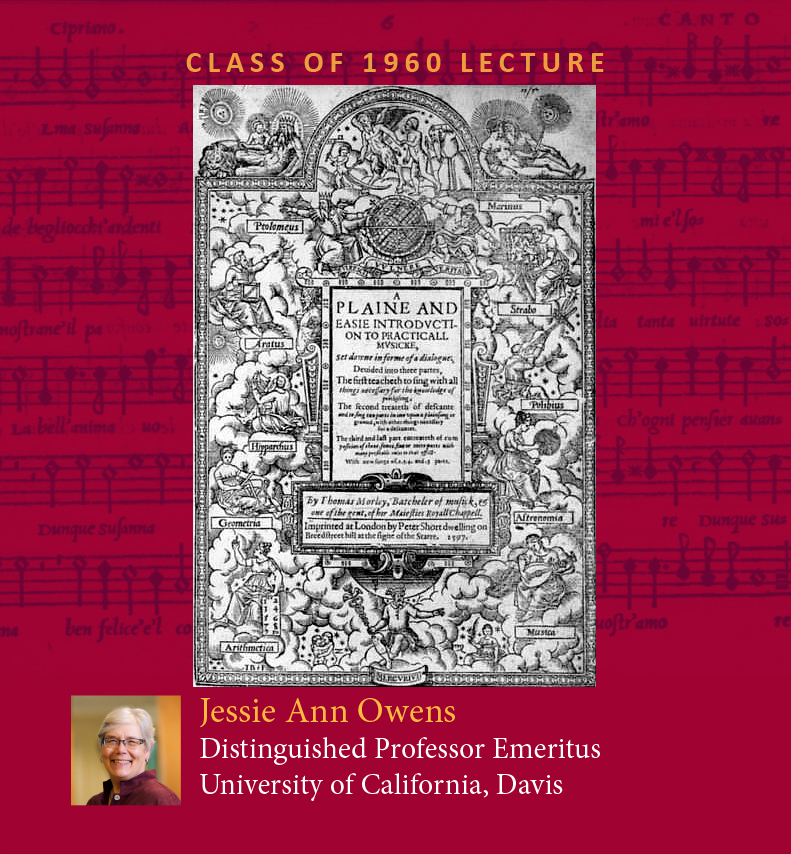 The Williams College Department of Music presents Professor Jessie Ann Owens of UC Davis and her lecture on Friday, April 7, at 4:15 p.m. She shares her research on an English treatise, A Plaine and Easie Introduction to Practicall Musick by Thomas Morley, published in 1597. This lecture is sponsored by the Class of 1960 Scholars Fund and is free and open to the public.

About Prof. Jessie Ann Owens
Owens earned her Ph.D. from Princeton University in 1978 with a dissertation that explored a cultural artifact of the Bavarian court—a lavishly illuminated manuscript of motets by the Flemish composer Cipriano de Rore, with a commentary by humanist Samuel Quickelberg. Following a post-doctoral Mellon fellowship at Columbia University and a fellowship from Villa I Tatti, the Harvard University Center for Italian Renaissance Studies, she joined the faculty of the Eastman School of Music, University of Rochester. In 1984 she moved to Brandeis University, where she stayed until 2006. She served as Dean of the College and later as Dean of Arts and Sciences, and was named Louis, Frances and Jeffrey Sachar Professor of Music. In 2006 she became Dean of Humanities, Arts and Cultural Studies and Professor of Music at UC Davis. As dean she oversaw the creation of two major facilities for the arts, the Ann E. Pitzer Center, and the Manetti Shrem Museum of Art.

Owens has held a number of fellowships, including the Martha Baird Rockefeller, Fulbright, American Council of Learned Societies, Folger Shakespeare Library (long term) and Huntington Library (short term). In 2006 she was a visiting fellow at All Souls College, Oxford, and 2015 the Robert Lehman Visiting Professor at Villa I Tatti. She served as President of the American Musicological Society from 2000 to 2002 and as President of the Renaissance Society of America from 2002 to 2004. In 2003 she was elected Fellow of the American Academy of Arts and Sciences, and in 2008 an honorary member of the American Musicological Society.

Owens has pursued a number of research interests within the field of Renaissance studies. Her early work focused on archival research about Italian Renaissance music, especially at the Este court in Ferrara during the mid-sixteenth century. She has focused in particular on the music of Cipriano de Rore, and the Italian madrigal. She edited the thirty-volume series The Sixteenth-Century Madrigal with Garland Publishing, the first modern edition of a number of madrigal books.

Analytical work on early music led her to a study of mode and key as organizing principles in music. She is continuing her investigation of tonal language by examining English music of the sixteenth and seventeenth centuries. With co-editor John Milsom she is editing Thomas Morley’s A plaine and easie introduction to practicall musicke (London, 1597), and making the key theoretical texts available as series editor of Critical Editions of Music Theory in Britain 1500–1700 (Ashgate, now Routledge). Another interest is historiography, especially as it relates to our understanding of a musical Renaissance. She also served as series editor of Criticism and Analysis of Early Music (Garland, now Routledge).

Owens is best known for her work on compositional process in early music. Her book Composers at Work: The Craft of Musical Composition 1450–1600 (Oxford University Press, 1997), which received the 1998 ASCAP-Deems Taylor Award, is the first systematic investigation of composers’ autograph manuscripts from before 1600 and offers a view of the conceptual foundations of musical language.

In recent years she has returned to her early interest in Cipriano de Rore. With Katelijne Schiltz she co-edited Cipriano de Rore: New Perspectives on His Life and Music (Brepols, 2016). She has served as guest editor for two themed issues of the Journal of the Alamire Foundation devoted to Cipriano (in press), and is currently writing a book about his dramatic music.