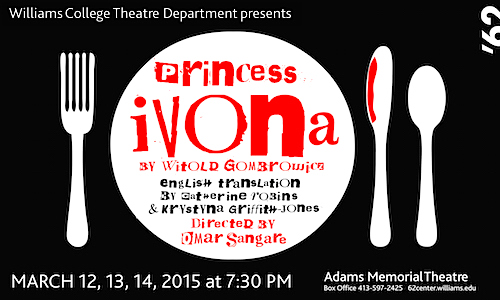 In this dark humor play, two different societies drastically collide: traditional and unconventional. The theme of the play highlights the comparison between those devoted to empty platitudes, lack of creativity, and hatred, and those with mysterious and inspiring minds. Witold Gombrowicz, one of the most influential playwrights of the twentieth century, brings humor, truth of human nature, and universal pieces of wisdom. Which society are you in? Come and find out!

This exciting production of a rarely-seen classic unites Williams Theatre Department artists with a creative team of international collaborators, including a set designer from Poland, a lighting designer who worked on Broadway and New York Fashion Week, a sound designer from the vanguard of innovative New York theater, and two choreographers from Tanztheater Wuppertal Pina Bausch.

The play introduces Prince Philip, the most eligible bachelor in Burgundia, who can attract any woman he desires. But when he declares his engagement to the commoner Ivona, his scandalized kingdom must confront the ugliness and cruelty within each soul. Why is the royal court so threatened by the mysterious future princess, who refuses to speak for herself? This grotesque comic fable by absurdist master Witold Gombrowicz explores what happens when genteel facades are shattered, fear and humiliation take over, and repressed human brutality gushes to the surface.

Witold Gombrowicz (1904-1969) was one of the foremost visionaries of twentieth-century world literature. A Polish dissident who sought refuge in Argentina during the Second World War, his irreverent, satirical works include “The Marriage,” “Ferdydurke,” “Memoirs Of A Time Of Immaturity,” and “Trans-Atlantic.”

Produced by arrangement with Rita Gombrowicz.