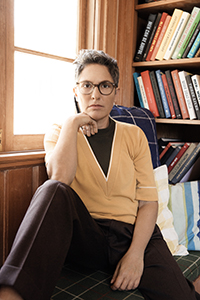 Jill Soloway is an artist and activist who created the Emmy and Golden Globe Award-winning Amazon streaming series Transparent. Jill also co-created and directed I Love Dick and wrote and directed the feature film Afternoon Delight, which won the 2013 Directing Award at Sundance. Jill founded TOPPLE, an intersectional brand for the revolution to create TV and film content as well as TOPPLE BOOKS, an imprint of Little A. Jill has published two memoirs, She Wants It – Desire, Power and Toppling the Patriarchy from Crown/PRH and Tiny Ladies in Shiny Pants from Free Press/Simon and Schuster. Jill cofounded 5050by2020, an artist empowerment network and strategic initiative of Time’s Up, as well as the community organization East Side Jews and the spoken word series Sit n’ Spin. Jill also co-created theatrical experiences The Real Live Brady Bunch and Hollywood Hell House.

The Bronfman-Wiener Lecture Series began conjunction with a course titled Jewish America, which focuses on representations of Jews in American popular culture in the 20th century and beyond. Jewish comedy in America receives particular attention. In the first of the series in Spring of 2018, Marc Maron joined us for an open, reflective, and fun conversation about how cutting-edge Jewish American artists are thinking about their contributions to American popular culture.

Soloway will engage in conversation with Jeff Israel, Assistant Professor of Religion, followed by an audience Q&A. Sponsored by the program in Jewish Studies, the Bronfman Fund, and the Wiener Lecture Fund. Tickets are free but required. You can reserve tickets online or by calling the box office at 413-597-2425, Tuesday – Saturday, 1-5 pm after April 2.