Poetry and Music at The Williams Bookstore 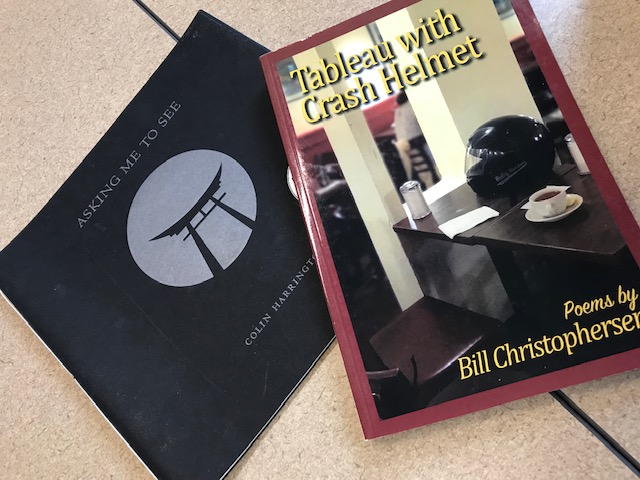 Colin Harrington lives in Windsor, Mass. He is an educator, interpretive guide at the Emily Dickinson Museum in Amherst, a gallery teacher at MASS MoCA and the Events Manager at The Bookstore in Lenox.

Colin is the author of the chapbook Asking Me to See: Seven Poems of Japan (MidGard’n Press). His poetry has been published in numerous anthologies, journals and magazines including: Under One Roof (Mad River Press); October Mountain (Mountain Press); and Potlatcxh, Vol. I and II. Colin is a guest columnist and book reviewer for The Berkshire Eagle. Works read will be from Asking Me To See: Seven Poems of Japan and Asking Me to See, Again: More Poems of Japan and snippets from a work in progress called Sweetheart Deals.

Bill Christophersen was born in the Bronx and educated at Columbia University.

He is the author of The Apparition in the Glass: Charles Brockden Brown’s American Gothic (U. of Georgia Press) and Resurrecting Leather-Stocking: Pathfinding in Jacksonian America (U. of S. Carolina Press. Bill has also written three poetry collections—Two Men Fighting in a Landscape (Aldrich Press), The Dicer’s Cup (Kelsay Books) and Tableau with Crash Helmet (Hanging Loose Press).

His book reviews and critical essays have appeared in Newsweek, The New Leader, The New York Times Book Review, The American Book Review and Poetry. His poems have won awards from Rhino, the Kansas Quarterly and the Robinson Jeffers Tor House Foundation, and have been nominated for a Pushcart Prize and for inclusion in Best New Poets 2014. He lives in New York City and plays traditional and bluegrass fiddle.