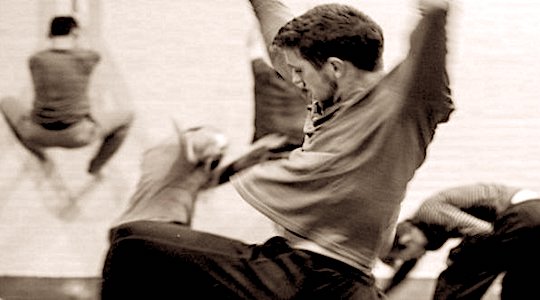 Physical Lab is an international laboratory created for young artists interested in performing arts. The point of entry is the body. Through physical grounding techniques the performers enter an exhilarating state of presence and become a vessel where energy, body, and voice are free and in flow. The methodology focuses on physical and vocal training, exploration of impulses, ensemble work, improvisation, working with text, building a character and performance. The work Identifies the performing qualities of the individual – as well as the restricting performing habits – and invites people into an exhilarating state of freedom and awareness. More information and videos can be found at: www.yorgosk.com/thework.htm

Yorgos Karamalegos is the founder of the laboratory, and he has co-founded Tmesis Theatre Company as well as Physical Fest (International Physical Theatre Festival). He has devised, directed and performed a repertoire of productions that have toured nationally and internationally to critical and popular acclaim and he has collaborated with members of Derevo, Pina Bausch Tanztheater, Complicite, and many more. Yorgos’s teaching resume includes LAMDA, Drama Centre London, RADA, and The Actors Centre in London, as well as workshops and residencies in Europe and Africa.