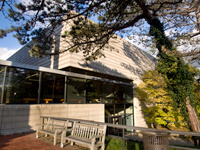 The bandleader, composer, violist, and celebrity Paul Whiteman had an outsized and controversial impact on American music in the first half of the twentieth century. Through recordings and live performances, on radio, film, and TV, Whiteman became one of the most prominent figures in American music during this period. Whiteman’s extensive archive has been housed in the Williams College Library Special Collections since the 1930s. A one-day symposium will be held on August 27, 2022 in the Bernhard Music Center at Williams College. This symposium is organized by W. Anthony Sheppard and is sponsored by the Special Collections Department and the Department of Music at Williams and marks the centenary of Whiteman’s first recordings and the completion of cataloging for the Paul Whiteman Collection.

There are no registration fees or forms required to attend the symposium, but if you plan to
attend please email your name to w.anthony.sheppard@williams.edu by August 15, 2022.