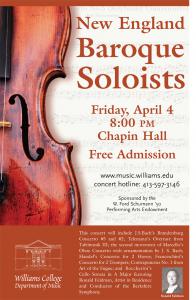 The New England Baroque Soloists will perform on Friday, April 4, at 8 p.m. in Chapin Hall on the Williams College campus. This free event is sponsored by the W. Ford Schumann ’50 Performing Arts Endowment and is open to the public.

This evening’s concert will include J.S.Bach’s Brandenburg Concerto #5 and #2; Telemann’s Overture from Tafelmusik III; the second movement of Marcello’s Oboe Concerto with ornamentation by J. S. Bach; Handel’s Concerto for 2 Horns; Franceschini’s Concerto for 2 Trumpets; Contrapunctus No. 1 from Art of the Fugue; and Boccherini’s Cello Sonata in A Major featuring Ronald Feldman, Artist in Residence and Conductor of the Berkshire Symphony.

The New England Baroque Soloists play the rich and colorful repertoire of the Baroque period featuring newly discovered works as well as well-known compositions by Bach, Handel, Telemann and others. One of the main elements that distinguishes the NEBS from other baroque ensembles is that the the concerts always represent all four families of the orchestra – winds, brass, strings and keyboard. This makes the concert experience all the more colorful and tonally appealing.

Yuko Naito, violin, a native of Japan, performs throughout the world as a soloist and chamber musician. She has performed at the Aspen Music Festival, the Norfolk Chamber Music Festival, Tanglewood and the Piccolo Spoleto Festival. Earlier, Ms. Naito was a member of the St. Louis Symphony Orchestra.

Kazuko Matsusaka, viola, joined the Boston Symphony Orchestra in August 1991. From 1987 to 1990, she was a member of the Pittsburgh Opera Orchestra, Pittsburgh Ballet Theater, and Pittsburgh New Music Ensemble. Ms. Matsusaka studied violin with Josef Gingold at the Indiana University School of Music. A Tanglewood Music Center fellow in 1985, she holds a bachelor’s degree from Hartt College of Music, where she studied violin with Charles Terger, and a master’s degree from the State University of New York, where she studied viola with John Graham.  In 1988 she was awarded a special jury prize at the Lionel Tertis International Viola Competition. Ms. Matsusaka has been a soloist with the Central Massachusetts Symphony, Newton Symphony Orchestra, and Boston Pops Orchestra. A prizewinner in the Fischoff National Chamber Music Competition, she has also participated in the Norfolk and Yellow Barn music festivals.

Ronald Feldman, cellist and conductor, is Artist in Residence in orchestral/instrumental music and coordinator of string chamber music here at Williams. He joined the faculty of Williams College in September of 2001, ending a distinguished career with the Boston Symphony Orchestra. His many chamber music affiliations have included performance with the Boston Symphony Chamber Players, Collage New Music Ensemble, and the Boston Conservatory Chamber Players. He has performed with artists Emanual Ax, Garrick Olsen, Gil Shaham, and Yo Yo Ma. He is also on the faculties of The Boston Conservatory, Berklee College of Music, and The New England Conservatory.

Cynthia Meyers, flute, is the piccolo player of the Boston Symphony, joining in the autumn of 2006. Before coming to Boston, she served as the Principal piccolo of the Houston Symphony. A native of Somerset, Pennsylvania, she began playing the piano at age 3. Ms. Meyers has performed with the Grand Teton Music Festival, the Minnesota Orchestra and the Chicago Symphony.

Laura Ahlbeck is currently the Principal oboist of the American Symphony Orchestra and the Bard Festival Orchestra, and is a frequent guest with the Boston Symphony. Previously she was a member of the Metropolitan Opera Orchestra. Recent concerto appearances include a performance of the Strauss oboe concerto at Carnegie Hall, with the Jerusalem Symphony Orchestra

Douglas Myers, trumpet, horn, and Artistic Director, has served as Principal trumpet in orchestras in the U.S., Europe and Asia, before turning his attention to a career as soloist and chamber musician. He specializes in the newly invented corno da caccia, or piccolo French horn.

Greg Whitaker, trumpet and horn, performs regularly with the Boston Pops, the Boston Symphony and the Bergen {Norway} Symphony Orchestras. He is a highly sought-after soloist and chamber musician, having recently appeared as soloist with the Boston Classical Orchestra.

Ben Woodward, keyboards, is active in New York and London as organist, pianist, conductor, coach, teacher and musicologist. Mr. Woodward is a graduate of Trinity College, Cambridge in the UK, from where he recently received his Honorary Masters.