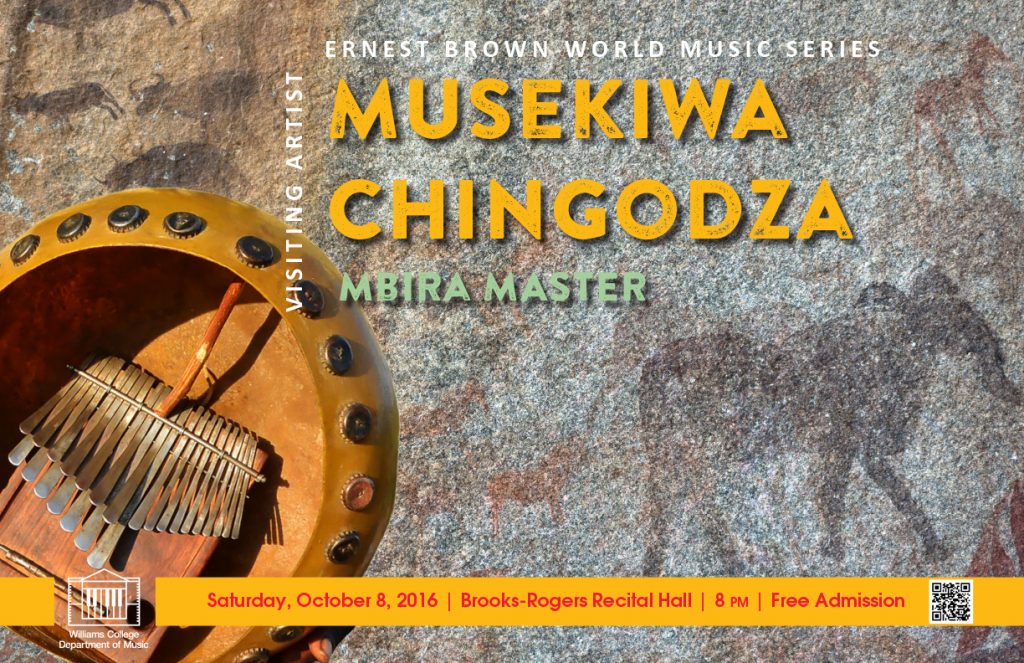 The Williams College Department of Music presents master mbira artist Musekiwa Chingodza Saturday, October 8 at 8 p.m. in Brooks-Rogers Recital Hall as part of the Ernest Brown World Music Series. This event is free and open to the public.

This concert showcases the many talents of Musekiwa Chingodza, a master musician with an engaging personality, gentle teaching style, virtuoso technique, and deep immersion in his culture. He is one of the world’s leading ambassadors of music from Zimbabwe, and he is also considered to be one of the world’s finest players of the mbira, an African musical instrument that consists of a wooden or gourd resonator and a varying number of tuned metal or wooden strips that vibrate when plucked.

Musekiwa Chingodza was born into a family of great mbira players in Mwangara village, Murehwa, Zimbabwe, in 1970. Musekiwa began by teaching himself to play mbira at age five. Through listening to other great mbira players, he developed a strong attachment to and love for mbira music. About his musical tradition he says, “Our music is both medicine and food, as mbira has the power to heal and to provide for people. Mbira pleases both the living and the dead.” As a performer Musekiwa was a key member of the band Panjea and composed the hit Zimbabwean song Ganda. For many years Musekiwa taught traditional music at Prince Edward School in Harare. As a singer, dancer and drummer in the Shona tradition he excels in playing hosho (gourd shakers) mbira dzavadzimu, and nyunga nyunga. Following up on his widely acclaimed CD with Jennifer Kyker, titled Tsunga, Musekiwa released his CD VaChingodza Budai Pachena. This was followed by Kutema Musasa, released in 2005. He has recorded five CDs, the latest release being Tomutenda Mambo (with Bud Cohen).

Musekiwa also arranges for Zimbabwean-style marimba, working with children, youth, and adults. A delightful teacher, he enjoys sharing all of these skills with North Americans in a friendly and supportive way.