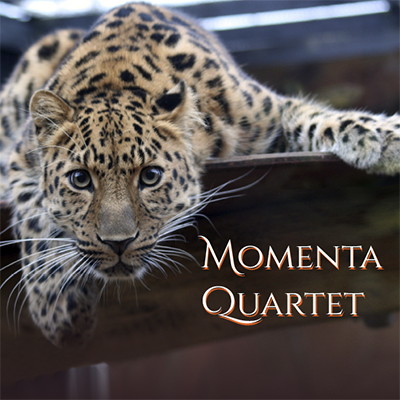 Members of Momenta Quartet are Emilie-Anne Gendron and Alex Shiozaki, violins; Stephanie Griffin, viola; and Michael Haas, cello. Along with featured guests, they present a concert of modern works, many by living composers. David Glaser’s All One Breath for soprano, clarinet, piano and string quartet sets to music Ecclesiastes 7:6 and Ecclesiastes 3:16 – 22. Ileana Perez Velazquez’s Elegía for String Quartet (2017) is inspired by the work of Spanish poet Miguel Hernandez and references the flamenco clave as a point of departure. After the intermission, Stephanie Griffin presents a world premiere of her own composition, The Leopard for soprano, clarinet and piano, featuring Sharon Harms, soprano; Ben Fingland, clarinet; Christopher Oldfather piano; and conductor Carl Bettendorf. Ileana Perez Velazquez’s work, Vuelo also celebrates a world premiere, inspired by Miguel Hernandez’s poem “El vuelo.” The evening’s grand finale is Aaron Copland’s Sextet (1937) for string quartet, clarinet, and piano, described as a work of “kaleidoscopic metric innovations and stylistic wanderlust.”