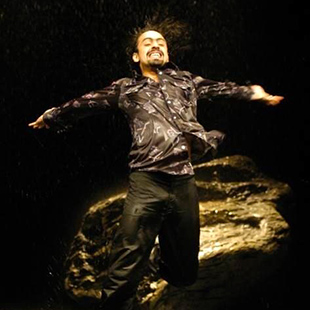 This fall, performing artists Pablo Aran Gimeno and Jorge Puerta Armenta will visit Williams College to share their inspiring work and professional expertise with students involved in theatre and dance. Both artists are primarily known for their performances created by the Tanztheater Wuppertal Pina Bausch, a German dance company founded in 1973 by Pina Bausch. Since its inception, the company has brought its innovative and original work on tours around the globe, and it continues to be a leader in the development of modern dance.

In her three decades at the helm of the Tanztheater Wuppertal, Pina Bausch elevated her company to international acclaim and became one of the foremost choreographers of her time. Born in Solingen in 1940, Bausch achieved excellence at the age of fourteen by studying under Kurt Jooss, one of the founders of German Expressionist dance. She eventually took over his Folkwang Ballet Company in 1969 before beginning her work as the artistic director of the Wuppertal Opera Ballet. Before her death in 2009, Bausch produced a number of striking pieces that revolutionized dance, including the Rite of Spring (1975), which was performed on a peat-covered stage, and Café Müller (1978), which displayed dancers staggering about the stage and falling over tables and chairs. Bausch helped pioneer a German style known as Tanztheater, which blended dance and drama by mixing short bursts of surreal dialogue and action with prominent stage sets. Bausch’s company made its American debut at the Olympic Arts Festival in 1984, where she wowed the American audience. Her characters did not merely dance; they spoke, sang, cried, and laughed. Bausch gained accolades throughout her life, including the prestigious Laurence Olivier Award from the Society of London Theatre, and she was elected as a Foreign Honorary Member of the American Academy of Arts and Sciences in 2009.

The Tanztheater Wuppertal continues to share its inspiring choreography throughout the world, and the company will perform at the Brooklyn Academy of Music this fall. As one of the company’s performers, Pablo Aran Gimeno uses his artistic skills to grapple with the themes that were essential to Bausch’s vision of the human condition. Aran Gimeno first achieved prominence in ballroom dance, gaining international acclaim in the 10-Dance style. Later, he studied in Barcelona and Madrid, where he developed a deeper expertise in Contemporary Dance, Classical Dance, and Contact Improvisation through his work at the Royal Conservatory. Jorge Puerta Armenta found his way into the same company through a different path. Originally from Bogotá, Colombia, Puerta Armenta received a scholarship in 1994 to attend the Centre National deDanse Contemporaine in Angers, France. After completing his academic studies, Puerta Armenta worked with the Folkwang Tanz Studio in Essen for seven months until he was asked to join Tanztheater Wuppertal Pina Bausch. Jorge Puerta Armenta has created numerous dance and theatre works including: At 17 Centimeters (Germany, 2013), The Silence Falls From the Trees (Institute of Arts from Bogota Colombia, 2012), Nothing Unusual (Germany, 2014), and Look (Germany, 2014).

Both artists continue to serve modern dance, art, and culture by enriching their artistic performances and teaching workshops for students in a variety of places. We are thrilled to welcome Pablo Aran Gimeno and Jorge Puerta Armenta to the ’62 Center this fall. Their schedule of activities on October 30, 2014 includes: