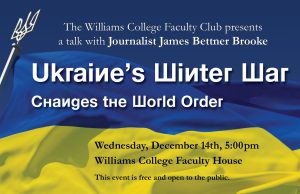 Journalist James Bettner Brooke will discuss the war in Ukraine. His talk is titled: Ukraine’s Winter War Changes The World Order. In his more than 40-year career, Brooke has served as editor in chief of the Ukraine Business News and the English-language Khmer Times in Cambodia. He was the Russia/former Soviet Union Bureau Chief for Voice of America in Moscow, and the Moscow Bureau Chief for Bloomberg. Before Bloomberg, Brooke reported for 24 years for The New York Times, largely overseas in countries such as Japan, South Korea, Ivory Coast and Brazil.

This event is free and open to the public. Refreshments will be served.