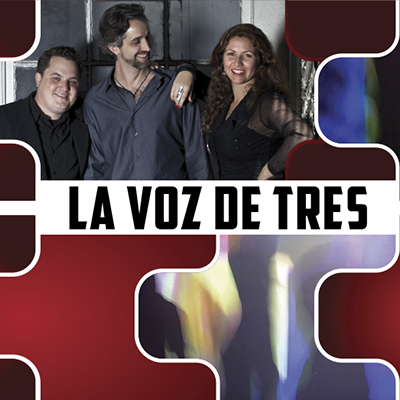 Natalia Bernal is a singer whose entrancing voice evokes the dramatic landscape of her Chilean homeland. Mike Eckroth is known as a formidable pianist who possess an unwavering groove and intimate familiarity with jazz and Cuban music idioms. Guitarist Jason Ennis slides fluidly between classical and blues-based phrasing on an instrument borrowed from the Choro traditions of Brazil. These three voices comprise the unique sound of New York City-based world jazz trio, La Voz de Tres.

With the 2010 release their CD La Voz De Tres, the band began to appear at some of the top jazz venues in the country, including Blue Note, Zinc Bar and Smoke (NYC), the Tempe Center for the Arts and the Nash (AZ) and the Kuumbwa Jazz Center (CA). The group has also appeared live on air on several major NPR affiliates. The CD received extensive national airplay, including being played on Jim Wilke’s Jazz After Hours on PRI. The following year, La Voz De Tres was invited by the municipal government of Iquique, Chile to conduct a week of workshops and performances. 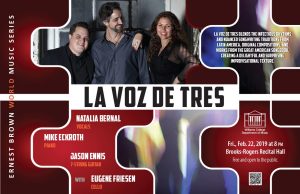