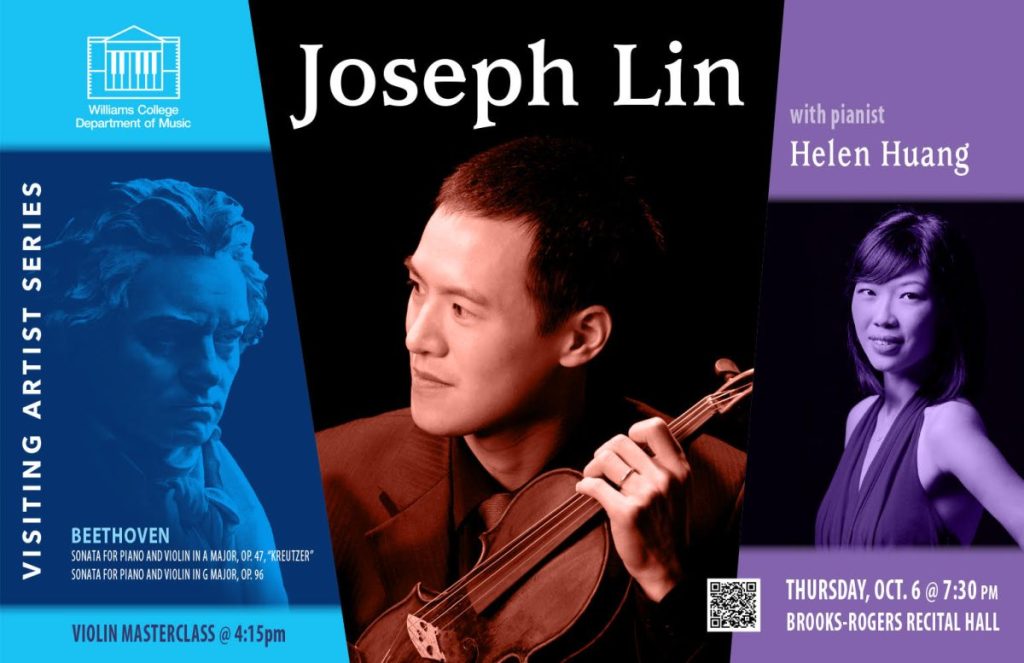 Joseph Lin
Sought after as a performer and teacher, Joseph Lin appears regularly throughout the U.S., Asia, and Europe. He teaches violin and chamber music at Juilliard and was first violinist of the Juilliard String Quartet from 2011 to 2018 before stepping down to devote time to his four young children. His recent projects include a collaboration with Robert Levin featuring Beethoven and Schubert on period instruments, performances of Bartók’s Second Violin Concerto, Beethoven’s late string quartets, and the complete Beethoven Violin Sonatas with Helen Huang at Juilliard.  Marking the 300th year of Bach’s Violin Sonatas and Partitas in 2020, Lin presented complete cycles in Boston and Philadelphia. This season, Lin returns to Mozart’s masterpiece, the Divertimento K. 563, which he takes on tour with Musicians from Marlboro.

From 2007 to 2011, Lin taught at Cornell University, where his projects included the inaugural Chinese Musicians Residency, as well as a collaboration with Cornell composers to study Bach’s Sonatas and Partitas and create new works inspired by Bach.

Lin was a founding member of the Formosa Quartet, which won the 2006 London International String Quartet Competition. In 1996, he won first prize at the Concert Artists Guild International Competition and was named a Presidential Scholar in the Arts. In 1999, he was selected for the Pro Musicis International Award and, in 2001, he won first prize at the inaugural Michael Hill International Violin Competition in New Zealand. His recordings include the music of Korngold and Busoni with pianist Benjamin Loeb; an album of Debussy, Franck, and Milhaud with pianist Orion Weiss; and the complete unaccompanied works of Bach and Ysaÿe. His recording of Mozart’s A Major Violin Concerto with original cadenzas was released in 2017. With the Juilliard Quartet, he recorded Schubert’s Death and the Maiden and Elliot Carter’s Fifth Quartet, as well as the Quartet’s recent album of Beethoven, Davidovsky, and Bartók. During the summer season, he is a regular artist at the Tanglewood, Ravinia, and Marlboro festivals.

Helen received the Arthur Rubinstein Prize upon graduating from the Juilliard School in 2004, where she was a student of Yoheved Kaplinsky. She went on to pursue her Master’s degree from Yale, where she studied with Peter Frankl. A dedicated teacher, she has served on the faculty of the Juilliard Pre-College. She currently resides in New Jersey with her husband and two daughters.

Joseph Lin and Helen Huang are presented by the Williams College Department of Music with the generous support of the W. Ford Schumann ’50 Performing Arts Endowment