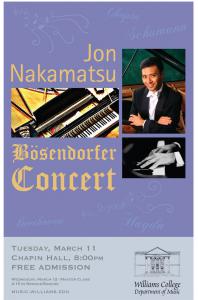 Jon Nakamatsu, award winning pianist, will give a concert on Tuesday, March 11, at 8 p.m. in Chapin Hall on the Williams College campus. This free event is open to the public.

This evening of music will feature Haydn’s Sonata No. 33 in C Minor; Beethoven’s Sonata No. 15 in D Major, opus 28 (”Pastoral”) and Sonata No. 14 in C-sharp Minor, opus 27, No. 2 (”Moonlight”); Schumann’s Papillons, opus 2; and Chopin’s Four Etudes and Andante spianato and Grande Polonaise, opus 22.

One of the most sought-after pianists of his generation, Jon Nakamatsu is a frequent concerto soloist, chamber musician, recording artist and solo recitalist throughout the United States, Europe and Japan. He enjoys a continuously expanding career based on a deeply probing and illuminating musicality as well as a quietly charismatic performing style.

Highlights of Jon Nakamatsu’s current season include return engagements with the Rochester Philharmonic Orchestra, Annapolis, Bozeman and Greenwich symphony orchestras, Lexington and Reno philharmonics and Santa Fe Pro Musica, as well as performances with the Northeastern Pennsylvania Philharmonic and the orchestras of Cape Cod, Florida West Coast, Fremont, La Crosse, Lincoln and Norwalk. He reunites with his colleagues of the Berlin Philharmonic Woodwind Quintet for performances in Berlin and Detroit, and is presented in recital from coast to coast. With his duo-recital partner, clarinetist Jon Manasse, Mr. Nakamatsu performs at the National Gallery of Art in Washington, DC, and in New York City, Boston, Des Moines and Saratoga, CA. Summer 2008 includes recitals at the Interlochen Center for the Arts and Portland Piano International, as well as returns to California’s famed Midsummer Mozart Festival and the Edgar M. Bronfman Chamber Music Series of the Sun Valley Summer Symphony and collaborations at the Colorado College Summer Music Festival and Canandaigua Lake and Santa Fe chamber music festivals.

Named Debut Artist of the Year (1998) by NPR’s “Performance Today,” Jon Nakamatsu has been profiled by “CBS Sunday Morning” and Reader’s Digest magazine, and is featured in “Playing with Fire,” a documentary on the Tenth Van Cliburn International Piano Competition, aired nationwide on PBS. Earlier, in 1995, he was named the First Prize winner of Miami’s Fifth United States Chopin Piano Competition. He records exclusively for harmonia mundi usa, which has released six CDs, including an orchestral album containing performances of Rachmaninoff’s Third Piano Concerto and Rhapsody on a Theme of Paganini, with Christopher Seaman and the Rochester Philharmonic Orchestra, as well as albums devoted to the music of Brahms, Chopin, Foss, Liszt and Wölfl. Mr. Nakamatsu’s most recent release is his second orchestral album with the Rochester Philharmonic Orchestra, featuring Gershwin’s Concerto in F and Rhapsody in Blue, conducted by Jeff Tyzik. Soon to be released is his first CD with clarinetist Jon Manasse, a recording of the Brahms Clarinet Sonatas.

Jon Nakamatsu has studied privately with Marina Derryberry since the age of six, has worked with Karl Ulrich Schnabel, and studied composition and orchestration with Dr. Leonard Stein of the Schoenberg Institute at the University of Southern California. In addition, he has pursued extensive studies in chamber music and musicology. A former high school German teacher, Mr. Nakamatsu is a graduate of Stanford University with a bachelor’s degree in German Studies and a master’s degree in Education.

Jon Nakamatsu and his duo-partner, the renowned clarinetist Jon Manasse, serve as Artistic Directors of the Cape Cod Chamber Music Festival, an appointment announced during summer 2006.