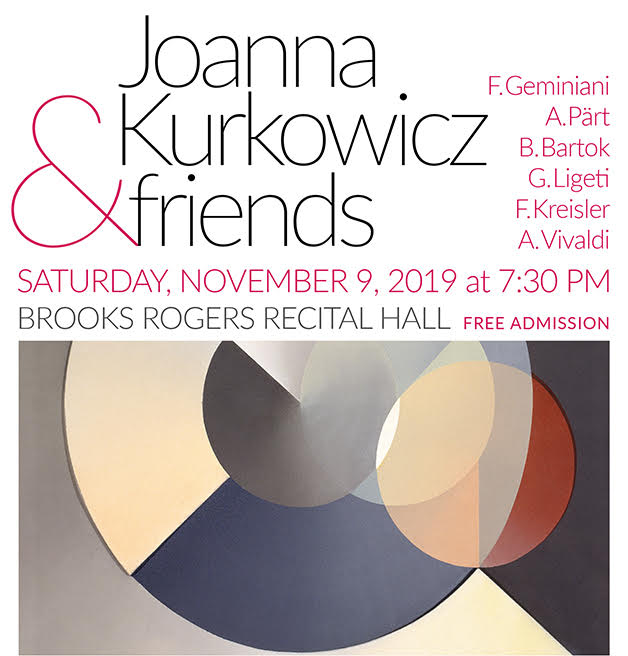 From baroque to contemporary Artist in Residence in Violin, Joanna Kurkowicz presents a varied and exciting program that includes Geminiani’s rarely played Sonata in C Minor for Violin and Piano, Vivaldi’s virtuosic Concerto for Four Violins, op. 3, No. 10 (RV.580), Arvo Pärt’s mysterious and very popular Fratres in the version for solo violin, string quartet and percussion (with Axxea String Quartet) and colorful duos for two violins by Bartók and Ligeti. The recital features Joanna Kurkowicz along with talented Williams students, her colleague pianist Doris Stevenson, and friends.

Bela Bartók’s 44 Duos for two violins represent a revolutionary approach to counterpoint. Typical of Bartók, they are based on Hungarian folksongs – some melancholy and dark, others rustic and boisterous. However, also typical of Bartók, they are highly experimental, toying with dissonance, polytonality, and rhythm. Bartók wrote his 44 violin duos primarily with education in mind, their technical and musical demands growing in complexity from the simple, foursquare openers to the exciting complexities of the final works.

György Ligeti – Balada si joc (Ballad and Dance) (1950) for 2 Violins
This is a short piece for two violins by György Ligeti, based on two Romanian folk songs. In 1949, Ligeti spent the year researching folk music in Romania. Some of the songs he transcribed on that trip eventually became the basis for Baladǎ şi joc, and also his Concert românesc (1951). The work is in two movements. The first, Ballad, is slow, melodic yet contrapuntal, and highly expressive. The second movement, Dance, is exuberant and very virtuosic.

Arvo Pärt – Fratres (1992) is a classic work of late 20th century minimalism, a simple piece consisting of about eight chord sequences punctuated by short passages fro the percussion. It is a piece of almost unbearable beauty and sublime stillness, reflecting its composer’s spiritual mysticism.

Antonio Vivaldi – Concerto in B Minor for Four Violins, op. 3, No. 10 (RV 580)
Only a small percentage of Vivaldi’s works were published during his lifetime, among them the B Minor Concerto for Four Violins, which appeared in 1711 as the tenth concerto in the composer’s opus 3 collection, L’estro armonico (The Harmonic Inspiration), dedicated to Grand Prince Ferdinand of Tuscany. The B Minor Concerto is the most radical of those for four violins. Its solo lines are entirely independent of one another, and the four players interact with individualized parts of democratic difficulty. Since the concerto No. 10 involves four soloists, Vivaldi must have appeared with his students when it was performed; that speaks to the extraordinary level of music-making that his pupils achieved. L’estro armonico became one of the most lauded, influential, and widely circulated instrumental collections of the entire Baroque era. Among its admirers was J.S. Bach.