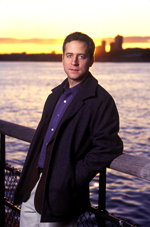 American pianist Jeremy Denk has gradually established a reputation as one of today’s most compelling young artists, with a wide-ranging, challenging repertoire. A 1998 recipient of the Avery Fisher Career Grant, he also won the 1997 Young Concert Artists International Auditions. He makes his debut with the Philadelphia Orchestra in June 2005. He has appeared as soloist (Rachmaninoff 2nd Concerto) at the Ravinia festival; with the San Francisco Youth Symphony (Grieg Concerto); with the London Philharmonia (Brahms D Minor Concerto), in Royal Festival Hall; and with the Juilliard Orchestra and Kurt Masur, in Avery Fisher Hall (Schumann Concerto)-a performance that was nationally broadcast on Performance Today. His current performing repertoire ranges from these more standard works to Messiaen, Ligeti, Lutoslawski, Kirchner, and Ives, and he maintains working relationships with a number of living composers. He premiered Jake Heggie’s concerto “Cut Time” with the Eos Orchestra, and has made a recording of Tobias Picker’s Second Piano Concerto with the Moscow Philharmonic on the Chandos label; this season he will perform and record the Berg Chamber Concerto. In a review of his 2001 performance of Bartok’s Second Piano Concerto, The New York Times wrote: “Hearing Mr. Denk’s bracing, effortlessly virtuosic and utterly joyous performance, one would never guess how phenomenally difficult the piano part is.”

He made a highly acclaimed New York recital debut at Alice Tully Hall in April 1997, as winner of the Juilliard Piano Debut Award; the Times reviewer described him as “a pianist with a searching mind.” A double degree (chemistry and piano) graduate of Oberlin College and Conservatory, he has tried to merge interests in literature and science with his performing career, and to create intellectually challenging, but still entertaining, programs. Last season, to celebrate the Ives year at the Ravinia festival, he paired Ives’ “Concord” Sonata with the last sonata of Beethoven and a “medley” of Bach chorales, chorale-preludes, American ragtimes, and Stephen Foster ballads. He helped organize two all-Ives concerts of all Ives at the Gardner Museum in Boston, composing program notes as well as playing in every work. This upcoming season, he has been invited to concentrate on icons of the standard repertoire: two all-Beethoven recitals in Philadelphia, Mozart festivals in Philadelphia and Boston, two performances of all the Bach partitas, and much of Schubert’s chamber music at an all-Schubert festival in Wigmore Hall in London.

Mr. Denk has always been an avid chamber musician. He has collaborated with many leading string quartets (Borromeo, Brentano, St. Lawrence, Shanghai, Vermeer) and has appeared at numerous festivals, including those of Santa Fe, Seattle, and the Spoleto Festivals in Italy and Charleston. In the last season, as a result of his wide chamber music repertoire, he has been called upon to replace Helene Grimaud at the 92nd St. Y, Andras Schiff at the Detroit Chamber Music Society, and Tzimon Barto at the Ravinia Festival, all at short notice. His duo recital with Richard Stoltzman was on the 92nd St Y’s “Distinguished Artist Series.” At the Spoleto festival 2004, he met and first performed with violinist Joshua Bell, who subsequently invited him to do a recital tour. They will continue to tour as a duo this upcoming season (2005-2006), appearing in Carnegie Hall among other places; the Philadelphia reviewer noted their “equal partnership, with no upstaging.” He has spent several summers at the Marlboro Music School in Vermont and been part of “Musicians from Marlboro” national tours; he studied for many years at the Ravinia Festival’s prestigious Steans Institute.

Mr. Denk records some of his touring, practicing, and otherwise unrelated experiences at a blog called “Think Denk.” (jeremydenk.blogspot.com) It is linked to by several other arts blogs, and was recently singled out for praise by the music critic of the New Yorker, who wrote “Who needs music critics when you have performers who can write like that?” After graduating from Oberlin, he earned a master’s degree in music from Indiana University as a pupil of György Sebök, and a doctorate in piano performance from the Juilliard School, where he worked with Herbert Stessin. Mr. Denk makes his home in New York City.