INK: An original, creative zoom lecture in celebration of the WCMA collection. 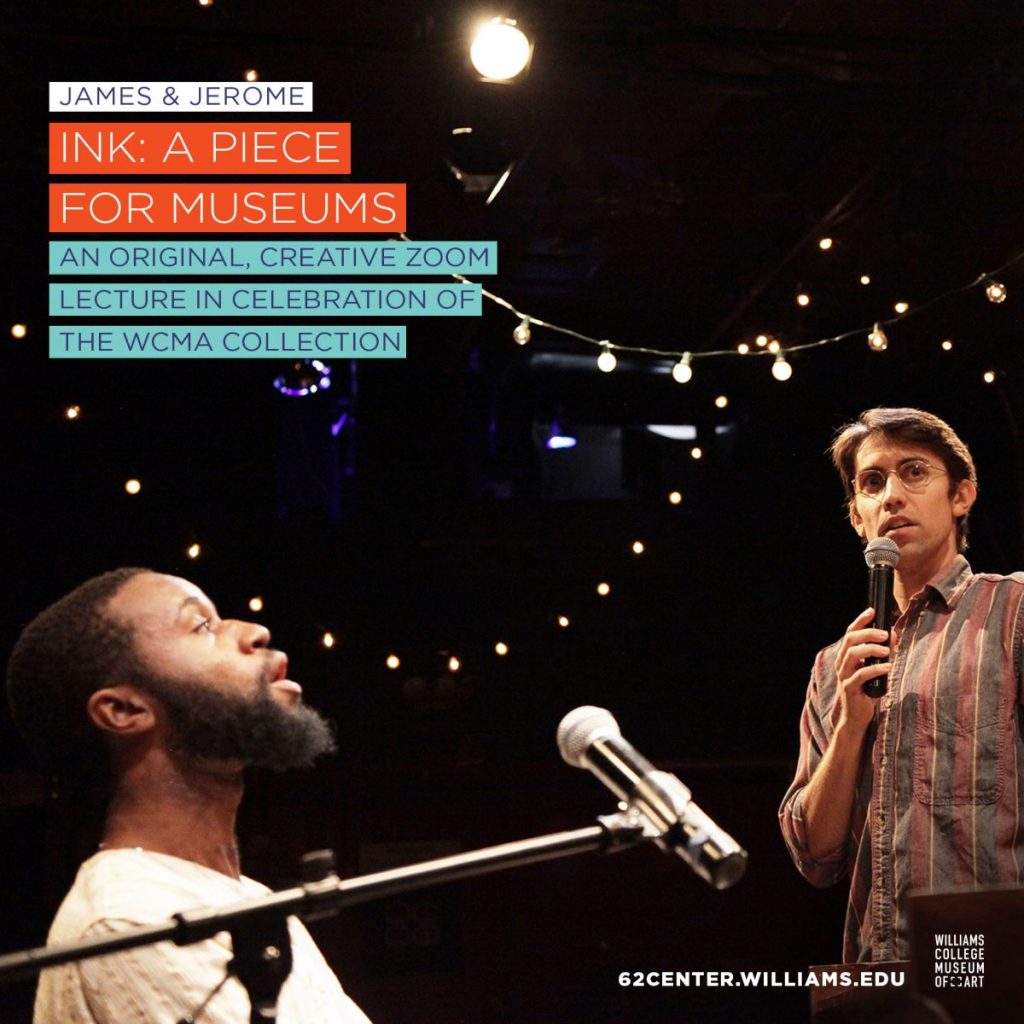 There will be a post-performance Q&A.

James & Jerome (James Harrison Monaco and Jerome Ellis) have spent years combining electronic music and the art lecture form to explore museum collections in an imaginative new way. In November 2019, NYC-based musician-storytellers James & Jerome were artists-in-residence at the Williams College Museum of Art. Along with media designer Shawn Duan, they explored the museum’s collection, drawing inspiration from objects across centuries and global cultures.

This was all intended to build to a run of live performances in the auditorium of WCMA this spring. Now, instead, on May 6th the artists will transform the essence of their work into a zoom lecture/musical experience. Susan Sontag famously wrote, In place of a hermeneutics, we need an erotics of art. This will be a way of exploring that idea.

James & Jerome (James Harrison Monaco and Jerome Ellis) are a duo of musician-storytellers based in New York. They make hyper-literary, live-music story performances for theaters and other spaces. Their work has been presented by The Metropolitan Museum of Art, Lincoln Center Education, La MaMa, the Under The Radar Festival, Joe’s Pub at The Public Theater, Ars Nova, and The Kimmel Center for the Performing Arts, among others. They often collaborate with directors Rachel Chavkin, Andrew Scoville, and Annie Tippe. Recent James & Jerome projects include: The Conversationalists (The Bushwick Starr), Piano Tales (La MaMa, Joe’s Pub at The Public Theater, Lincoln Center Education, etc.), Ink (Metropolitan Museum of Art, The Brick, BRIC Arts Media), Aaron/Marie (Under The Radar Festival, Ars Nova), and They Ran and Ran and Ran (HERE Arts). They have developed their work at residences with The Kimmel Center for the Performing Arts, The Public Theater, Berkeley Repertory Theatre, and BRIC Arts Media, and they were members of the Public Theater’s inaugural Devised Theater Working Group.

Jerome Ellis is a dysfluent, Afro-Caribbean composer, performer, and writer originally from Virginia Beach and based in New York City. His concerts, performances, and texts are invitations to healing, transcendence, communion, and deep listening. Through an interdisciplinary practice that focuses on oral storytelling, improvisation, and the interrelations between speech, silence, disability, and religion, he’s collaborated with choreographers, rappers, playwrights, booksellers, typographers, podcasters, toddlers, otolaryngologists, and filmmakers. Mr. Ellis’ work has been presented or developed by the Metropolitan Museum of Art, the Sundance Institute Theatre Lab, Lincoln Center, and WKCR. He’s a 2019 MacDowell Colony Fellow, a writer in residence at Lincoln Center Theater, and a 2015 Fulbright Fellow. Together with childhood friend James Harrison Monaco, he forms one half of the musician-storyteller duo James & Jerome. Their show Ink: A Piece for Museums (co-created with media designer Shawn Duan) was presented by the Metropolitan Museum of Art as part of the Public Theater’s Under the Radar Festival 2019 – the first ever collaboration between the Met and Under the Radar. He’s also a piano tuner and teacher, as well as a translator from Portuguese.

James Harrison Monaco is a storyteller, writer, and musician. He is one half of the music-storytelling duo James & Jerome. His shows are frequently directed by Rachel Chavkin, Andrew Scoville, and Annie Tippe. Recent James & Jerome projects include: Piano Tales (La MaMa, Joe’s Pub at The Public Theater, Lincoln Center Education, etc.), Ink (The Brick, BRIC Arts Media), Aaron/Marie (Under The Radar Festival, Ars Nova), and They Ran and Ran and Ran (HERE Arts). Recent solo storytelling projects include Tales for Telling (Ars Nova), and Reception (HERE Arts, The New Ohio). He co-wrote, performed in, and co-composed the music for Love Machine(Incubator Arts), and he is a collaborator on Reconstruction (Still Working but the Devil Might Be Inside), an upcoming project by The TEAM. Recent dramaturgy work includes: Dave Malloy’s Ghost Quartet (The Bushwick Starr, The McKittrick Hotel, etc.) and Howard Fishman’s A Star Has Burnt My Eye (BAM, The Brick, etc.). He has been granted residencies with The Kimmel Center for the Performing Arts, The Public Theater, Berkeley Repertory Theatre, and BRIC Arts Media. He has studied and worked in the USA, Ghana, and Spain. He also works as a fiction writer, percussionist, and translator from Spanish and Italian