“Indigeneity” and the Cultural Production of Mexico’s Pueblos Originarios: A Panel Discussion 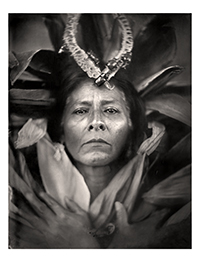 “Indigeneity” and the Cultural Production of Mexico’s Pueblos Originarios: A Panel Discussion with Citlali Fabián, Ana Daisy Alonso Ortiz, Isaura de los Santos Mendoza and Amal Eqeiq; moderated by Roxana Blancas-Curiel. This panel discussion, organized in conjunction with the exhibition of two photographic series by Citlali Fabián, centers on indigenous languages of southern Mexico (Zapotec, Chatino, and Tzotzil) and the cultures and communities associated with them.  We aim to explore the challenges and opportunities presented by this long-overdue focus on the indigenous languages and cultures from the UN* and, increasingly, in the US academy.

Citlali Fabián is an Oaxacan photographer, whose exhibits Mestiza Portraits and I’m from Yalálag are on display in Hollander Hall Lobbies and WCMA’s Object Lab. Ana Alonso Ortiz  and Isaura de los Santos Mendoza are from Oaxaca, Mexico and Ph.D. students at UMASS, Amherst. Amal Eqeiq is Assistant Professor of Arabic Studies and Comparative Literature and Roxana Blancas-Curiel is Mellon Postdoctoral Fellow in Mexican Literature and Cultural Production.

*The United Nations has declared 2019 the Year of Indigenous Languages.

This event is part of a yearlong series on Race and Democracy sponsored in part by the W. Ford Schumann ’50 Program in Democratic Studies.