Imani Perry: South to America: A Journey Below the Mason Dixon to Understand the Soul of a Nation 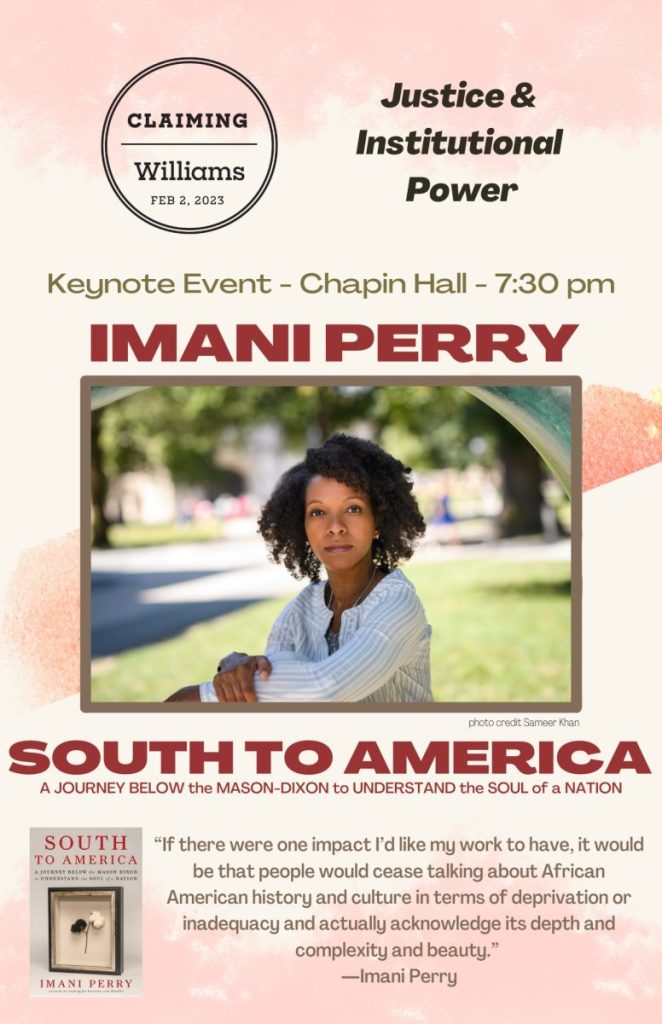 This is the Claiming Williams 2023 evening keynote event. There will be a pre-seating for the campus at 6:45pm.Remember to bring your Williams ID. Doors open to the public at 7pm.

This event will be live streamed and shown live on WilliNet TV channel 1303 in Williamstown. A link to the live stream will be available on this site closer to the date.

Born just nine years after the 16th Street Baptist Church bombing in Birmingham, Alabama, Imani Perry was instilled from an early age with a strong instinct for justice and progressive change. The rich interplay between history, race, law, and culture continues to inform her work as a critically-acclaimed author and the Hughes-Rogers Professor of African American Studies at Princeton University.

Perry’s work reflects the deeply complex history of Black thought, art, and imagination. It is also informed by her background as a legal historian and her understanding of the racial inequality embedded in American law. Her latest book, National Book Award-winner South to America: A Journey Below the Mason Dixon to Understand the Soul of a Nation, is a narrative journey through the American South, positioning it as the heart of the American experiment for better and worse. In looking at the South through a historic, personal, and anecdotal lens, Perry asserts that if we do indeed want to build a more humane future for the United States, we must center our concern below the Mason-Dixon Line. A “rich and imaginative tour of a crucial piece of America” (Publishers Weekly), South by America defies classification. In her New York Times book review, Tayari Jones writes, “Any attempt to classify this ambitious work, which straddles genre, kicks down the fourth wall, dances with poetry, engages with literary criticism and flits from journalism to memoir to academic writing—well, that’s a fool’s errand and only undermines this insightful, ambitious and moving project…. An essential meditation on the South, its relationship to American culture—even Americanness itself…. This work—and I use the term for both Perry’s labor and its fruit — is determined to provoke a return to the other legacy of the South, the ever-urgent struggle toward freedom.” South to America was named a best book of 2022 by the New Yorker, Time, Kirkus, and Oprah Daily.

Perry’s writing has appeared in The New York Times, The Atlantic, New York Magazine, and Harper’s, among other publications. Future planned projects include an examination of African American theories of law and justice, and a meditation on the color blue in Black life. She earned her Ph.D. in American Studies from Harvard University, a JD from Harvard Law School, an LLM from Georgetown University Law Center and a BA from Yale College in Literature and American Studies.

This is the Claiming Williams 2023 evening keynote event. Open to the public at 7pm. There will be a pre-seating for the campus at 6:45pm. Bring your Williams ID!