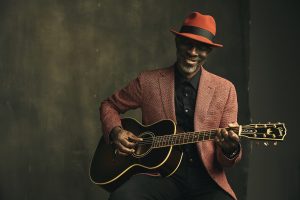 Kevin Roosevelt Moore, professionally known as Keb’ Mo’, will engage in an on-stage conversation with Martha Williamson ’77, a trustee of the college, as part of Commencement 2019 Weekend events.

Keb’ Mo’ is a leading figure in the latest wave of the blues renaissance. A Nashville-based singer, guitarist, and songwriter, and a four-time Grammy Award winner, his musical style incorporates influences from many eras and genres, including folk, rock, jazz, pop, and country. Originally from Compton, Calif., Keb’ Mo’ began his recording career with Jefferson Airplane violinist Papa John Creach, appearing on four of his albums starting in the early 1970s. He went on to play with a variety of bands throughout the 1970s and 1980s. His recording debut as a bandleader, Rainmaker, was released on Chocolate City Records in 1980. In the early 1990s Keb’ Mo’ performed in productions of Spunk, a play based on an adaptation of three stories by Zora Neale Hurston, and released his self-titled album, which features two covers of songs by blues musician Robert Johnson, one of his greatest influences. He won his first Grammy Award for his 1996 album, Just Like You, which featured guest appearances from Jackson Browne and Bonnie Raitt. In addition to performing with some of music’s top artists, Keb’ Mo’ has made numerous television and film appearances.

Martha Williamson is president and CEO of MoonWater Productions, a production company specializing in family and inspirational entertainment. Martha is best known as the executive producer and head writer of “Touched By An Angel,” which received nine Emmy nominations over its nine-year run on CBS. A member of the Board of Trustees since 2012, Williamson founded the Williams Arts and Entertainment Fellowship with Peter Nelson ’76 in 1991, providing internships and support for students and graduates interested in arts careers, and she oversees the J. Lindley and Louise R. Williamson Scholarship Fund, established in 1995.

This event is free and open to the public. No tickets required.