Haiti, Beauty, and Justice in 2021: A Conversation with Edwidge Danticat and Évelyne Trouillot 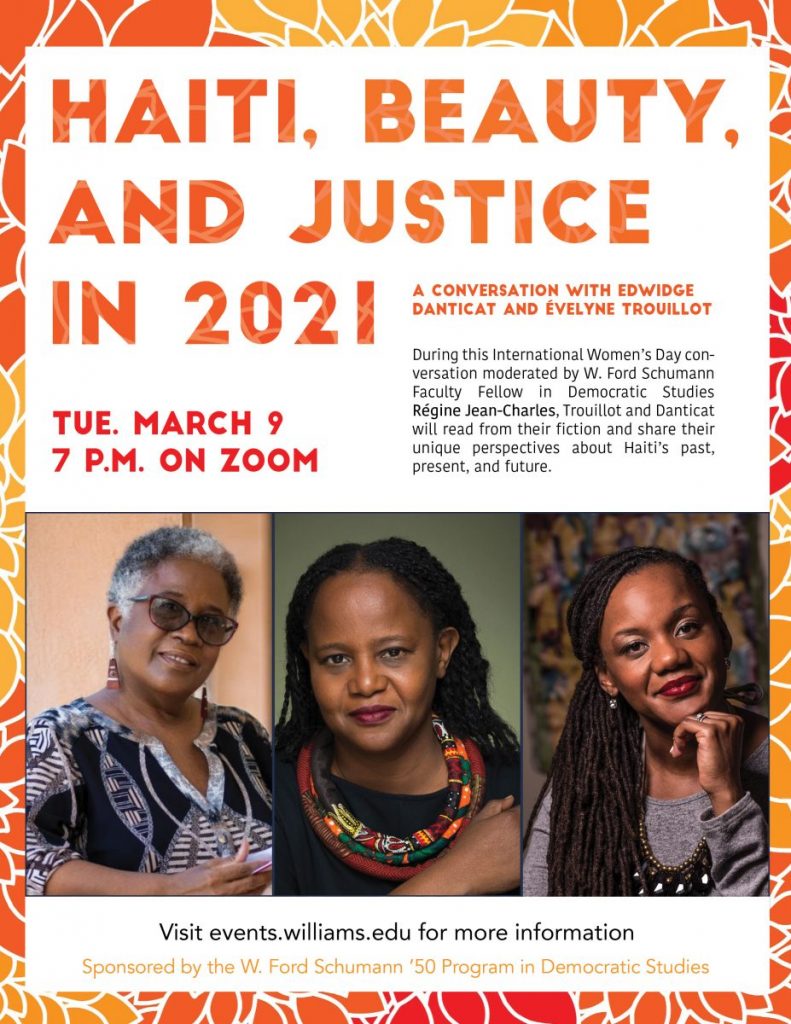 Here is a link to the recording of this event.
In a recent essay, the award-winning Haitian author Évelyne Trouillot writes, “…my writings, stemming from my lived experience and my aesthetic and social vision for a more beautiful and just world, are presented to readers who are not always acquainted with my reality…” The same can be said of the internationally acclaimed author Edwidge Danticat whose writing set in Haiti and in the Haitian diaspora reflects a commitment to humanity, beauty, and justice. During this International Women’s Day conversation moderated by W. Ford Schumann Faculty Fellow in Democratic Studies Régine Jean-Charles Trouillot and Danticat will read from their fiction and share their unique perspectives about Haiti’s past, present, and future.
Edwidge Danticat is the author of several books, including Breath, Eyes, Memory, an Oprah Book Club selection, Krik? Krak!, a National Book Award finalist, The Farming of Bones, The Dew Breaker, Create Dangerously, Claire of the Sea Light, and Everything Inside. She is also the editor of The Butterfly’s Way: Voices from the Haitian Dyaspora in the United States,  Best American Essays 2011,  Haiti Noir and Haiti Noir 2. She  has written seven books for  children and young adults, Anacaona, Behind the Mountains, Eight Days, The Last Mapou, Mama’s Nightingale, Untwine, My Mommy Medicine, as well as a travel narrative, After the Dance. Her memoir, Brother, I’m Dying, was a 2007 finalist for the National Book Award and a  2008 winner of the National Book Critics Circle Award for autobiography.  She is a 2009 MacArthur fellow, a 2018 Ford Foundation “The Art of Change” fellow, and the winner of the 2018 Neustadt International Prize and the 2019 St. Louis Literary Award.
Évelyne Trouillot lives in Port-au-Prince, Haiti, and teaches in the French department at the Université d’État d’Haïti. She has published her first book of short stories in 1996. In 2004 Trouillot received the Prix de la romancière francophone du Club Soroptimist de Grenoble for her first novel, Rosalie l’infâme. In October 2013 Rosalie l’infâme was published in English translation by the University of Nebraska Press, under the title The Infamous Rosalie. In 2005 Trouillot’s first piece for the theater, Le bleu de l’île, received the Beaumarchais award from ETC Caraïbe. Trouillot has also published four books of poetry in French and in Creole. Her novel La mémoire aux abois, published in France by Éditions Hoëbeke in May 2010, presents a compelling view of the dictatorship in Haiti and received the prestigious award Le prix Carbet
de la Caraibe et du Tout-Monde in December 2010.
Sponsored by the W. Ford Schumann ’50 Program in Democratic Studies. Here is a link to the recording of this event.