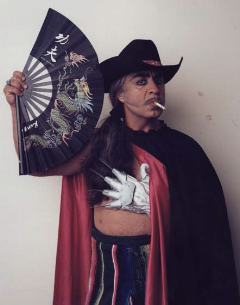 Guillermo Gómez-Peña’s most recent solo performance, El Mexorist 2: Amerca’s most Wanted Inner Demon, navigates the contested terrain known as the US/Mexican border. By telling a story of realities and surrealities; he acts as a warrior in transnational identity and immigration issues. As El Mexorcist Gómez-Peña assaults the construction of the US/Mexican border that is lined with Minute Men, rising nativism, three ply fences, globalization, and transnational identities.

Performance artist and writer, he was born in Mexico and arrived in the US in 1978. Since then he has investigated border culture and trans-cultural identity. Through journalism, performance, radio, video, poetry and installations he has explored the relationship between Latinos and the US. From 1984 to 1990 he founded and participated in the “Border Arts Workshop”, and contributed to the national radio programmeCrossroads. He is one of the editors of High Performance magazine and of the Drama Review. He has received the Prix de la Parole at the International Theatre Festival of the Americas (1989), the Bessie prize in New York (1989) and a MacArthur Fellowship (1991), among other awards. Author of the book Warrior for Gringostroika published by Graywolf Press in 1993. In 1997, his book The New World Border received the American Book Award.