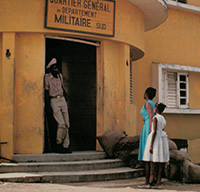 This year’s French Film Festival begins with L’homme sur les quais / The Man by the Shore. Haitian filmmaker Raoul Peck, who later went on to become the nation’s Minister of Culture, directed this drama that examines the violence and instability of his country’s darkest days, the 60s. The story follows an 8-year old girl, whose parents had to flee from the dictator Duvalier and the Tontons Macoutes. Left in the care of her grandmother, she creates a fantasy world of her own to escape the violence and tyranny that surrounds her.  [In French and Haitian Creole with English subtitles.]

The French Film Festival 2019 continues on