Forum on the Status of Women in Politics 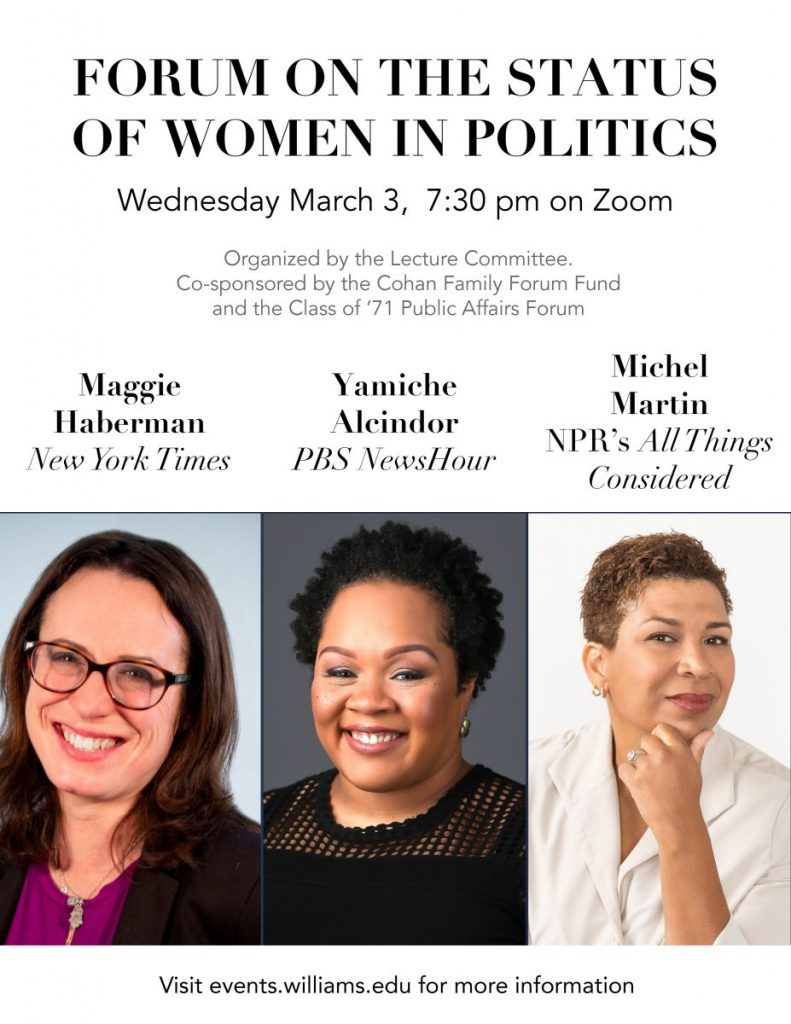 Maggie Haberman, New York Times White House correspondent and CNN political analyst, has established herself as one of the country’s most respected journalists and reliable resources for expert commentary on current events and national issues.  In 2018, Maggie and her team at the New York Times received the Pulitzer Prize for National Reporting for their coverage of the Trump administration and alleged Russian interference in the 2016 U.S. Presidential campaign, and the Aldo Beckman Award from the White House Correspondents’ Association.  Her stories covering a contentious administration offer a revealing insider’s look at what is sure to be known as our country’s most explosive era of modern journalism. A seasoned veteran of political reporting, she covered City Hall for the New York Daily News, the 2008 U.S. Presidential campaign and other political races for the New York Post, as well as national affairs as a senior reporter for Politico.

As the White House correspondent for PBS NewsHour and an NBC and MSNBC Political Contributor, Yamiche Alcindor methodically unravels the steady stream of breaking news. The daughter of Haitian immigrants who met while attending Boston College, Alcindor has written extensively on the intersection of race and politics. She has covered the impact of President Trump’s policies on the working-class, immigration, and breaking news coming out of Africa, the Middle East and Asia. She has also reported on the presidential campaign of Senator Bernie Sanders, the legacy of President Obama as well as how police killings affect communities and children.

The recipient of the White House Correspondents’ Association Aldo Beckman Award for Overall Excellence in White House Coverage as well as the 2020 NABJ Journalist of the Year Award, Alcindor has become a steady voice in journalism. She earned a master’s degree in broadcast news and documentary filmmaking from New York University and a bachelor’s in English, government and African American studies from Georgetown University.

Emmy-winning journalist Michel Martin is the weekend host of NPR’s All Things Considered and former host of Tell Me More.  Martin currently serves as a contributor for PBS’s Amanpour & Company. Her previous credits include ABC News, Nightline, as well as covering politics for The Washington Post and The Wall Street Journal. Martin has been honored by numerous organizations, including the Candace Award for Communications from The National Coalition of 100 Black Women. Martin graduated cum laude from Radcliffe College at Harvard University in 1980 and earned a Master of Arts from the Wesley Theological Seminary in 2016. In 2019, Martin was elected into the American Academy of Arts and Sciences for outstanding achievement in journalism.

This is event is organized by the Lecture Committee and sponsored by the Cohan Family Forum Fund, which seeks to provide a catalyst for debate and discussion of matters of national importance with a preference for the areas of politics, journalism, finance and social justice. It is co-sponsored by the Class of ’71 Public Affairs Forum.

Free and open to the public. All are welcome.