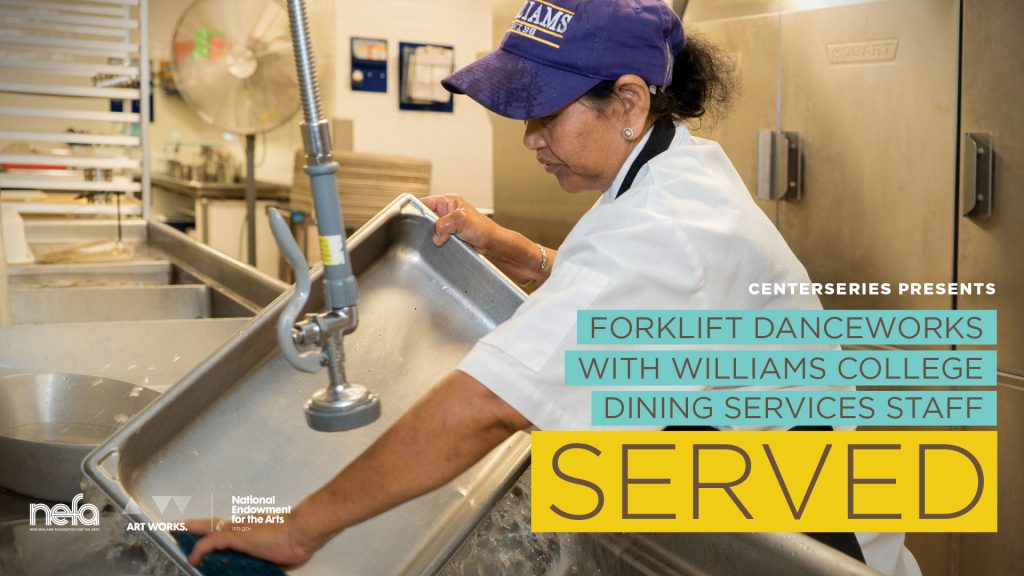 Many shows will appear sold out online. We will always have a wait-line for those shows. Unclaimed tickets will be released to this line five minutes before curtain on a first come, first served basis. We have an excellent record of getting the audience on the wait line into shows. Wait lines usually start forming an hour before curtain.

Inspired by the movement of everyday life, Forklift Danceworks creates civic spectacles with unlikely performers. Throughout the academic year, Forklift will lead the creation of Served—a dance for and by Williams College Dining Services Staff, illuminating the nearly non-stop movement of campus dining halls. Co-authored with participating staff and students, Served aims to address equity and build connection through a community-based dancemaking process.

Since 2001, Forklift Danceworks has pursued its mission of engaging diverse communities through choreography, using movements from daily life and casting community members as primary performers. Through its projects, Artistic Director Allison Orr and Associate Choreographer Krissie Marty have earned critical acclaim and a host of awards, including Best Choreographer of 2016 by The Austin Chronicle and Most Outstanding Choreographer of 2013 by the Austin Critics’ Table.

Served is presented at Williams in partnership with the Office of the Vice President for Campus Life, Dining Services, Claiming Williams, Center for Learning in Action (CLiA), Dance Department, Theatre Department, Music Department, and the Gaudino Fund.

Line cooking done well is a beautiful thing to watch. It’s a high-speed collaboration resembling, at its best, ballet or modern dance. A properly organized, fully loaded line cook, one who works clean, and has ‘moves’ – meaning economy of movement, nice technique and, most important, speed – can perform his duties with Nijinsky-like grace.  – Anthony Bourdain, Kitchen Confidential