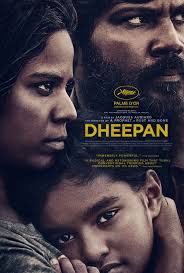 Williams Reads invites you to a free screening of, Dheepan, the second in a series of films on the topic of immigration. Dheepan is the story of a Tamil freedom fighter in Sri Lanka, a Tiger.  In Sri Lanka, the Civil War is reaching its end, and defeat is near. Dheepan decides to flee, taking with him two strangers – a woman and a little girl – hoping that they will make it easier for him to claim asylum in Europe. Arriving in Paris, the ‘family’ moves from one temporary home to another until Dheepan finds work as the caretaker of a run-down housing block in the suburbs. He works to build a new life and a real home for his ‘wife’ and his ‘daughter’, but the daily violence he confronts quickly reopens his war wounds, and Dheepan is forced to reconnect with his warrior’s instincts to protect the people he hopes will become his true family.

This is event is part of the year-long programing for Williams Reads, which aims to foster new connections among students, staff, faculty, and community members by exploring diversity through a common reading experience. Developed by the Committee on Diversity and Community (CDC), Williams Reads is an initiative offered as an opportunity for us to explore a book together that will help us to celebrate and deepen our appreciation of diversity. It is a goal of the CDC to select a book that will stimulate community engagement and challenging conversation. The Williams Reads book selection for 2019-20 is Exit West by Mohsin Hamid.

The first film in this series is An American Tail, which screens on Sunday, Oct 6 at 1pm. Both films are free and open to the public.